14779: ANA Members Are Masters Of Hypocritical Bullshit And Blatant Lies. 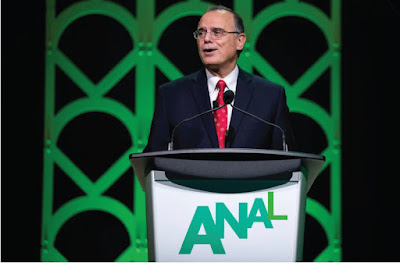 Advertising Age reported the ANA kicked off its latest soiree with a “major focus on multicultural marketing”—including hyping its “#SeeALL” propaganda, a colored version of its “#SeeHer” divertisement diversion. Um, the ANA has been gnashing its dentures over diversity for more than a decade, with no progress worth reporting. Although maybe it can be argued that ANA CEO Bob Liodice opting against producing another self-promotional video on the topic is progress. Sorry, but repeatedly advocating for equality without actually doing anything is patronizing and passive bias.

For the past several years, Association of National Advertisers CEO Bob Liodice has kicked off the group’s largest conference of the year by ticking off a laundry list of issues plaguing the industry, including the opaque digital media supply chain, ad fraud and the ANA’s long-running fight with media agencies over transparency in contracts.

But on Thursday, as he opened this year’s “Masters of Marketing” at the Rosen Shingle Creek resort in Orlando, Liodice abandoned the typically combative tone in favor of focusing on a single issue: diversity.

He urged the trade group’s members to make multicultural marketing a priority by plugging several ANA initiatives, such as “#SeeALL,” a new program aimed at getting marketers to better target multicultural communities. It is an offshoot to the long-running #SeeHer” initiative that seeks to boost by 20% the accurate portrayals of women and girls in U.S. advertising and media by 2020.

“SeeALL” is led by the ANA’s Multicultural Marketing and Diversity Committee, which has also launched a new “cultural insights impact measure.” The metric, known as CIIM, “identifies the impact and effectiveness of cultural insights in ads and programming and how these have the potential to affect sales lift,” according to a September blog post by the ANA’s multicultural marketing chairperson Gilbert Dávila.

“When you infuse cultural insights into your advertising … you can actually generate a lift in sales … and that is what this is all about—to be able to dive growth while we are being purposeful marketers,” Liodice said in his speech.

On the growth front, Liodice delivered positive news, saying that eight in 10 Fortune 500 companies grew revenue last year, while six in 10 grew after-tax profits. That is an improvement over recent years, during which roughly half of the companies on the list have experienced declining after-tax profits. “Our job now is to institutionalize that growth and ensure it’s not just a one time event,” Liodice said.

But when it comes to multicultural marketing as a growth lever, the industry has a long way to go. Multicultural consumers comprise nearly 40 percent of the total U.S. population, but multicultural media investments make up only about 5 percent of total advertising and marketing spending, according to a study published in August by the ANA’s Alliance for Inclusive and Multicultural Marketing.

Also, more than 60 percent of Fortune 500 companies are spending less than 1 percent of their of their advertising budget on segment-specific targeted media, according to the ANA. The trade group is “prioritizing inclusion and equality as a call to action for corporations looking to drive incremental growth,” Dávila said in the September blog post.

Liodice in his speech played a video featuring several chief marketers touting multicultural marketing, including Target marketing chief Rick Gomez, who remarked that “prioritizing the multicultural consumer: it’s no longer a nice to do, it’s a must-do.”

Left unsaid in Liodice’s speech is the failure by companies to promote people of color to top marketing jobs. Only nine of the chief marketing officers at the nation’s largest 100 brands and companies were minorities, down from 11 CMOs in 2017, according to a recent study from executive recruitment firm Spencer Stuart. Also, none of the 18 CMOs hired last year were minorities.

The lack of diversity in senior positions is apparent at this year’s conference: an overwhelming majority of the 3,000 people attending the event are white.

The reason the overwhelming majority of the people attending the conference are white is because for the last several years, the POC who have attended spoke up, vociferously, about the death of the multicultural agencies, the subsequent loss of countless minority ad professionals who were working in them, and the "transferring" of all those jobs to white agencies claiming to do "Total Market" work.

The response was deafening silence. Instead of doing anything, the ANA put together one toothless do-nothing, offend-no one "diversity" initiative after another until we got to where we are today:

The few POC left standing in the industry who used to attend bailed completely because they weren't being heard, and spread the word that ANA wasn't doing anything meaningful despite the alarm being sounded repeatedly (at ANA conferences!) that POC talent was bleeding out.

I saw the video he made in 2009. But he's white, hes good. For black professionals though, who participate in the nonsense, its not all good. The only secure route for left black professionals in advertising is the sellout "diversity professional"career path. They only serve one purpose, to protect white agencies from any scrutiny and racist accusations. So essentially they are fueling their own peoples demise by aiding and shielding these agencies. Its really screwed up when you wrap your head around the whole diversity charade thing. On top of all this, they all setup award shows, where adcolor, ana, adclub, give and nominate each other for awards for basically doing nothing to fix the problem. Since 2006 they've been playing the game, soon enough once they serve their purpose, the black diversity folks will be cut off as well.