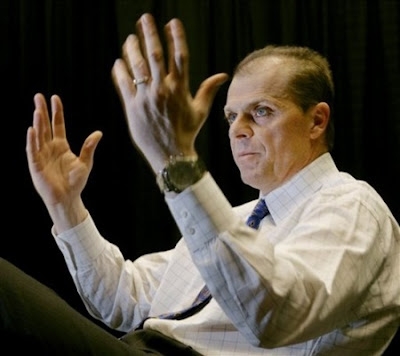 Advertising Age reported fresh details on former General Motors Liar/new Team Detroit CEO Mark LaNeve. According to the article, within an hour of signing his contract, LaNeve bought a white 2013 Ford Explorer. Not sure if there is symbolism behind the color. LaNeve probably views himself as a white knight; however, he’s just a typical corporate White man. The purchase undoubtedly lifted the morale of his agency’s staff. There’s nothing like seeing the new boss shower himself with expensive gifts.

The piece also revealed that LaNeve landed his position at Team Detroit after first emailing his resume directly to Ford. The executives at Ford didn’t have any openings for LaNeve, but they told Team Detroit CEO Satish Korde to call the jobseeker. The buddy system is alive and well in the auto and advertising industries.

It should be interesting to see how LaNeve partners with Ford’s minority advertising agencies. After all, the man fired GM’s minority shops—handing the work over to White agencies—despite publicly fibbing that such a move would never happen. Hey, he could duplicate the scheme at Team Detroit under the guise of creating cross-cultural capabilities.

Throughout the interview, LaNeve sounds more like a client than an adman. Honestly, is the moron really qualified for the role? The guy has spent his entire career telling agencies what to do. What happens when Ford brand managers instruct him to kiss their asses? Can’t help but think that LaNeve joining Team Detroit will lead to a total car wreck.

The former General Motors marketing VP accepted the job of chief operation officers at WPP Global Team Ford on July 31. An hour after signing his contract, Mr. LaNeve said, he bought a white 2013 Ford Explorer with a black interior.

On Aug. 20, his third day on the job, Mr. LaNeve, 53, spoke to Automotive News about moving to the agency side of the business.

“Asia’s going to be a huge opportunity as our business grows, not just on the brand side and launch but on the dealer side,” he said.

Mr. LaNeve started his career at GM, then took a detour to Volvo Cars of North America in 1997, where he was VP-marketing and later CEO. Volvo was then owned by Ford. He returned to GM in 2001 as head of Cadillac and later becoming the North American sales and marketing boss.

In 2009 he became chief marketing officer of Allstate Corp. in Northbrook, Ill., where, among other things, he oversaw the popular “Mayhem” advertising campaign.

Mr. LaNeve left Allstate in February and in mid-May emailed his resume to Mark Fields, Ford’s president of the Americas.

“I was contacted by a couple of other car companies, but Ford is the only one I reached out to,” Mr. LaNeve said.

There was no opening at Ford, but Mr. Fields and Jim Farley, Ford’s marketing chief, gave Satish Korde, Team Detroit’s CEO, the green light to phone Mr. LaNeve. Mr. Korde had been looking for help to handle the agency’s largest client, Ford.

“Mark brings this unbelievable knowledge of an area which we don’t directly get involved in, and that’s going to educate all of my team,” Mr. Korde says.

Mr. LaNeve is credited with reviving Cadillac in the early 2000s. Ford wants to rebuild Lincoln with improved products and marketing. Mr. Korde says a new Lincoln ad campaign will be released in November to launch the redesigned 2013 MKZ sedan.

But Lincoln faces challenges that are different from those Cadillac faced a decade ago, Mr. LaNeve said. Today’s light-vehicle market in the United States is smaller than the 17.2 million units sold in 2001. It’s more competitive, and the digital, viral flow of information is much different, he said.

“It’s a different environment, but Ford has a plan for Lincoln that includes a new design language with one product after another over a period of years,” Mr. LaNeve said. “I’m going to learn about it and see how I can contribute.”

Jamie LaReau is a reporter for Automotive News