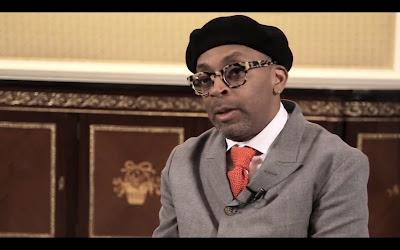 Spike Lee on Clients, the Knicks and the Need for Change in Adland

Writer and Director Inducted into Advertising Hall of Fame

Let me set the stage: Spike Lee showed up for our interview dressed for the pages of GQ—rainbow-colored shoes, a grey coat with bright tie and white shirt, leopard-spotted glasses and a beret. If his vibe sent a signal of accessibility, it would be strictly on his own terms, I soon found out.

My interview got off to a less than auspicious start. “That’s not a current quote,” he said when I asked him about his observation that advertisers have to slip in the message because consumers don’t want ads to dictate to them.

His current thinking is “people seem to be conducive to branded content, long-form instead of the same old 30-second spots. And a lot of these branded pieces, you don’t even know who the company is until the credit comes at the end. I’ve done several of these for Chevrolet and Cadillac.”

But whether short-form or long-form, Spike—who was just inducted into American Advertising Federation’s Hall of Fame—said too many advertisers convince themselves they can reach black consumers with general advertising because they don’t know “the code.”

The code, he said, is about cultural references. “You have to live it, you have to be part of it, and not just say that you have a very famous African-American friend. That’s faking the funk to me.”

So what needs to be done to push change? “Well, it’s going to have to take people who get it, people who don’t want to stay stuck in the ‘Ozzie and Harriet’ world, that world is gone. … As they say in Brooklyn, ‘dun,’ d-u-n.”

DDB gets it. Otherwise it wouldn’t have made the deal to start Spike-DDB, Spike said. “But … as a whole, the advertising agencies have not gotten it.”

The creator of the iconic Mars Blackmon TV spots for Nike said the only world that gets it is sports, “because the bottom line is, you can play or you can’t play.”

“We’re not talking about that now,” he replied.

“I mean there are black and brown people who are presidents of NBA, and baseball, and other pro sports organizations, GMs, scouts, coaches,” he said. “It’s not perfect but ... they put Hollywood to shame, they put television to shame, and they put the advertising world to shame.”

He said Phil Knight was discouraged by many from using Michael Jordan as the face of Nike because it would deter white consumers from buying Nike products.

Wouldn’t you think people would learn a lesson from that, I asked, to which he replied: “You need to be asking the people who are the heads of agencies that question, not me.”

I pointed out that we have asked them, and they always say they’re trying. “You know that line is so tired. That’s from the 1960s,” Spike said, adding a two-word verdict on agency claims they can’t find enough black and Hispanic talent: “It’s bullshit.”

Spike is currently working on a movie called “Chiraq,” which contrasts the war zones in Iraq and Chicago. Mayor Rahm Emanuel, among others, is not thrilled with the title.

“Not talking about that,” he said.

“I don’t talk about stuff until it happens. It’s a jinx, bad luck, bad karma.”

I pressed on. I’m just trying to get a story here, I said.

“No, I understand. That is absolutely your job, and it is also my job not to answer questions I’m not going to answer.” b I changed the subject. What does Spike think of viral media?

“I would say that social media has changed the whole world, and not just advertising. I mean, it gives anybody access to as many people as they can get themselves in front of. And I want to take this opportunity to thank my daughter and son who prodded me into the modern world with social media. My children where the ones who said, ‘Daddy, you need to have Facebook. You need to be on Instagram. And thank God they did that because I’m able to reach people that I would not have been able to reach.”

He said he has 800,000 followers on Twitter and 100,000 on Instagram. “It’s good to engage with the people who support you. I don’t read Twitter that much because Twitter can be a very hateful place.”

Spike said social media has expanded his audience to the point where he now has an e-commerce store, Spike’s Joint. And he uses social media to promote his appearances so he doesn’t have to pay for publicity.

I asked him what he was proudest of. “I’m going to answer that, sir, like a parent. I’m proud of everything I’ve done, you know? Some were more successful than others, but there’s nothing I’ve done that I’m gonna hide my head, anything like that. You’ve got to be proud of what you do whether people like it or not, you know, stand behind your work.”

Once in a while, clients can get in the way. “I don’t mind clients having input, I just wish that they would know what they’re talking about. I would say 90% of the people I’ve worked with are great, but that 10%, they’re just displaying their ignorance about camera or lighting or whatever it is and they just let it be a big show of force for position.”

Spike wouldn’t name any of the lousy clients, but he cited Nike, Pepsi, Chevy, Cadillac, Major League Baseball, NFL and the New York Knicks as among the best.

I asked him if the Knicks dismal performance this season made them a hopeless case. “No, there’s always hope,” Spike Lee said. “Do Cubs fans have hope? They haven’t won since 1908. They still have hope. Wrigley Field continues to sell out because fans believe “this is gonna be the year. That’s hope.”

Then I asked what the Knicks needed to do to improve next year. “You’ve got to ask Phil Jackson. He’s the president. I don’t have a say.”

Well, you should, I said.

“There should be peace on Earth, too,” he responded.

Meanwhile McCann can't even tell the difference between a Puerto Rican celebrity and a Mexican one in their Mexican Cinco de Mayo slop.

Then Waffle House retracts is racist Cinco de Mayo tweet, and ad agency darlings, the kind who see nothing wrong with the McCann crap above, respond exactly as you’d guess.