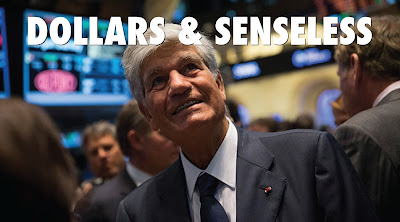 Adweek reported Publicis Groupe CEO Maurice Lévy earned only $3.1 million last year as a result of failing to meet performance criteria. Of course, Lévy’s salary is still roughly $3 million more than the average senior-level executive in Publicis Groupe. The people deciding Lévy’s loot should have viewed the old man as a drunken john, given all of his reckless spending on every digital prostitute that crossed his path. Hell, if MDC Partners CEO Miles Nadal is facing investigation for his money handling, Lévy ought to be placed under an auditor’s microscope too.

Failed to meet some performance targets

Since 2012, Lévy has not collected a base salary, with all of his compensation tied to performance criteria. (That compensation is capped at €5 million, which is currently worth $4.6 million.) At Publicis Groupe’s annual meeting yesterday in Paris, Lévy’s performance evaluation was shared for a year when the company’s audacious plans to merge with rival Omnicom fell apart.

Lévy did not meet expectations on three of his four quantitative criteria: total shareholder return, increased earnings per share, and organic growth. However, he achieved results in increasing net income and was paid $1.6 million for doing so. (Net income fell 9 percent, but headline net income, which strips out various losses and costs like those related to the Publicis-Omnicom merger and Publicis’ $3.7 billion acquisition of Sapient, rose 4.7 percent in 2014.)

The Publicis chief fared better with qualitative criteria. In updating the company’s 2013 strategy with detailed plans to achieve objectives, Publicis said Lévy “partly achieved” his goals. That was also the case with his efforts to define the Groupe’s future organizational structure and “implement a transitional phase,” which presumably refers to Lévy’s planned retirement in 2017. He was fully successful in raising the proportion of digital income to 50 percent of the Groupe’s total revenue and was paid $1.4 million.

In a newly released yearbook of 2014 highlights, Lévy acknowledged the uneven performance and hinted that the negotiations and ultimate failure of the Omnicom merger might have been a distraction:

“It is true that [2014] was a year of mixed results for Publicis Groupe, with 2 percent growth over the year, which falls short of both our abilities and expectations. The reasons are numerous and are due in part to the fact that our core management teams were too focused on other projects, which did not materialize.”