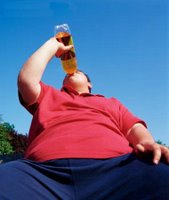 Soft news in a MultiCultClassics Monologue…

• Soft drinks lead to soft bodies, according to researchers at Yale University. A study showed soft drinkers don’t appear to compensate for their consumption of sugary liquids by reducing calories in other areas of their diets. A scientist connected to the research said, “There is compelling evidence that soft drinks have negative effects, and so actions such as stopping their sale in schools and scaling back marketing to children are justified.” Sprite will probably change its “Sublymonal” campaign to actual subliminal messages.

• Now folks are worried that the scenario involving rapper Tony Yayo beating up a kid for wearing a Czar Entertainment t-shirt may lead to more violence (see Essay 1901). As it turns out, the kid is the son of Czar Entertainment chief Jimmy Rosemond. One source said Rosemond, a former gang member, is plenty pissed off. “If he wanted Yayo dead, he’d be dead already,” said the source. Hey, that line would make for a great t-shirt design.

• Snoop Dogg has been denied a visa by British authorities. The rapper had planned a European concert tour with P. Diddy. A spokesperson for Mr. Dogg said, “Snoop and his team are mystified at the decision and are hoping that the British government will reconsider this decision.” Mystified? Gee, wonder if it had anything to do with the melee staged by Snoop and his posse in London’s Heathrow Airport back in 2006 (see Essay 558).
Posted by HighJive at 10:58 AM