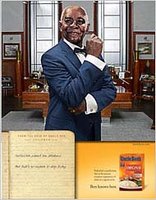 A racially charged advertising character, who for decades has been relegated to a minor role in the marketing of the products that still carry his name, is taking center stage in a campaign that gives him a makeover — Madison Avenue style — by promoting him to chairman of the company.

The character is Uncle Ben, the symbol for more than 60 years of the Uncle Ben’s line of rices and side dishes now sold by the food giant Mars. The challenges confronting Mars in reviving a character as racially fraught as Uncle Ben were evidenced in the reactions of experts to a redesigned Web site (unclebens.com), which went live this week.

“This is an interesting idea, but for me it still has a very high cringe factor,” said Luke Visconti, partner at Diversity Inc. Media in Newark, which publishes a magazine and Web site devoted to diversity in the workplace.

“There’s a lot of baggage associated with the image,” Mr. Visconti said, which the makeover “is glossing over.”

Uncle Ben, who first appeared in ads in 1946, is being reborn as Ben, an accomplished businessman with an opulent office, a busy schedule, an extensive travel itinerary and a penchant for sharing what the company calls his “grains of wisdom” about rice and life. A crucial aspect of his biography remains the same, though: He has no last name.

Vincent Howell, president for the food division of the Masterfoods USA unit of Mars, said that because consumers described Uncle Ben as having “a timeless element to him, we didn’t want to significantly change him.”

[Click on the essay title above to read the full story.]
Posted by HighJive at 9:01 AM

So Ben's running the show now? Maybe he can hire chief illiniwek as his VP.

This is why i write non-fiction. My imagination simply can't top reality anymore.