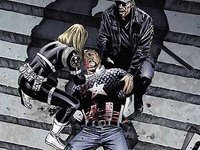 Captain America may return, but will our liberties?

When your time comes to die, pray the Maker grants you a Marvel Comics death. Because death in the comic book universe, unlike death in the real world, has a way of being only temporary.

Spider-Man’s Aunt May died, but it turned out she was being held hostage and the dead woman was an imposter.

The Vision died, but his operating system was downloaded into a new body.

The Thing died, but his partners in the Fantastic Four stormed heaven to retrieve his soul.

In comic books, casket lids have handles on the inside. So I was initially amused last week at the outpouring of attention generated by Marvel’s latest death, the assassination of Captain America on the steps of the federal courthouse in New York City. It made “CNN,” for goodness sake! And Fox News. It also made international headlines, covered in newspapers from New York to Los Angeles to Ottawa to London to Sydney.

On reflection, I suspect there are two reasons the world took notice. The first: the graphic nature of the murder. Captain America — Steve Rogers — is shot by a sniper. Then a sometime girlfriend, acting under post-hypnotic suggestion, finishes the job by pumping three bullets into his stomach at close range. Even in comic books, there’s a certain finality to three in the gut, point blank.

The second reason Captain America’s death resonates has more to do with what’s going on in our world than his. Meaning terrorism, war and this creeping sense some of us have that our country is being stolen.

Captain America’s shooting culminates an allegorical post 9/11 storyline that has seen him leading the resistance against an edict requiring people with super powers to register with, and be regulated by, the federal government. Those who refuse are designated “unlawful combatants” and disappeared without trial into secret prisons. “Am I even in America?” gasps one young hero as he is being led away.

That’s something many of us have asked in these last years of government-sanctioned torture, secret surveillance and Patriot actions.

Captain America has, since his creation in 1941, served as a mirror of American moods, fears and aspirations. In the ‘40s, he reflected American determination to defeat the Axis powers, in the ‘50s, American preoccupation with communism, in the ‘70s, American disillusionment.

It is a stark sign of our times, then, to see him led to court for defying the federal government. For 66 years, Captain America has been the conscience and moral center of the universe he inhabits, the good soldier, the decent American, the one who did the right thing. Now he lies bleeding out on courthouse steps, having tried and failed to stop the federal government from betraying core American values. The symbol of freedom lies dying with handcuffs on.

In the real world, meantime, American troops continue to die in a conflict predicated on bad readings of worse intelligence. And the National Security Agency eavesdrops on American phone calls and e-mails. And the Transportation Security Administration might put your name on its “no-fly” list and you can neither find out why nor appeal. And prisoners at Guantanamo Bay, Cuba, are in their fifth year of indefinite detention, no charges filed.

And if all that’s just fine with some of us — “We’re at war!” they like to shout — others of us watch with trepidation. We marvel — no pun intended — at how blithely the nation has mortgaged its moral authority, international prestige and sense of national mission. We wonder where America went. We wonder if we will ever get her back.

By my count, this is the fourth time Captain America has died — though never this emphatically. Still, I’m sure he will eventually return.

I am less sanguine about the nation whose name he bears.

[LEONARD PITTS is a columnist for the Miami Herald.]
Posted by HighJive at 1:37 AM

It's hard for me to beleive they would kill off such an iconic character like Captain America. Some serious symbolism there. It looks like the Punisher may take up the mantle though.

I recently did a story about Cap's Death over at Highbrid Nation. I wanted to talk about it from the perpective of the Hip Hop community. Check it out if you get a chance.