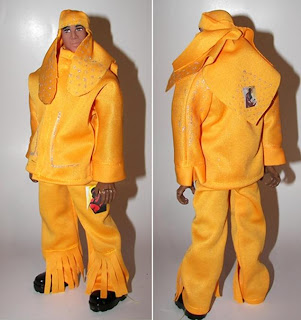 A controversial Harlem church ordered action figures cast in the image of their leader — and sued when the dolls they got didn’t look like him and weren’t black enough.

The Israelite Church of God in Jesus Christ says the Connecticut toymaker put “pointed noses and faces” on the dolls. And half of them “were light brown” instead of “dark brown,” the court papers state.

Now the church wants its $45,000 down payment back from the Vicale Corp. and is seeking another $120,000 in damages, according to the lawsuit filed in Manhattan.

Toymaker Emil Vicale said an “obnoxious” customer named Jason Moody put in the doll order, and approved the design and the skin color. And he intends to countersue.

Vicale said the first inkling that Moody might be representing a church came when the group sent a recording for the voice chips that bore the message, “Praise the Lord our God Jesus Christ.”

That was followed, Vicale said, with a phrase he didn’t understand. It closed with, “Say it again; say it one more time.”

Once known as the Israeli Church of Universal Practical Knowledge, the church says blacks are one of the lost tribes of Israel. They’ve been branded a hate group by the Southern Poverty Law Center.

Their leader, according to the SPLC, is Jermaine Grant, who also calls himself the “Chief High Priest Tazadaqyah” and once prophesied that a vengeful black Jesus would return to Earth to kill or enslave all white people.

Grant, 37, was not at the storefront church at Madison Ave. and 125th St. and could not be reached for comment at his home in Hackensack, N.J. A Jaguar and a Mercedes-Benz SUV sat in the driveway Thursday night. The house was purchased for $700,000 in 2005.

“That’s bizarre,” a neighbor said. “To make a doll of yourself is pretty egotistical.”

According to the lawsuit, Moody contacted Vicale and put in an order for some “custom made speaking dolls” that they planned to peddle for $120 apiece at a March fund-raiser.

Based on pictures provided by the church, Vicale came up with two “doll head models.”

“Both doll head models had the same round facial structure, eyes and nose,” the papers state.

But one was “light brown” and the other was “dark brown.”

Each was supposed to have an elaborate, sequin-studded outfit like those favored by Grant. Photos of a prototype by Vicale show an action figure dressed in a glitzy gold outfit and black shoes.

The doll company, which is based in Oxford, Conn., has made a Jesus action figure, as well as Sarah Palin and New Jersey “Tan Mom” Patricia Krentcil dolls. The company website shows Vicale is selling a “Rambama” action figure of President Obama holding a high-powered rifle that sells for $34.95.

There is also an anatomically-correct Anthony Weiner figure that goes for $49.95. It’s called the “Anthony Weiner — Weiner Action Figure.”

Email ThisBlogThis!Share to TwitterShare to FacebookShare to Pinterest
Labels: lawsuit

This is a dam shame to my people Israel. May the Most High power God put you to shame for even thinking about creating the image of yourself you men of Israel know the Laws Statues and commandments of Yahawah. God of Abraham Isaac and Jacob. How dare you, Tazadaqyah go against the commandments of God and create an image of oneself