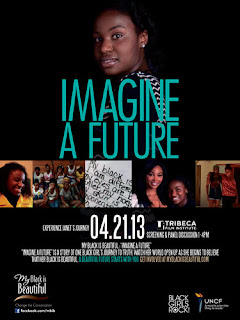 TYPICALLY, cause-marketing efforts involve profit-making companies partnering with charities to raise money. But Procter & Gamble, with its five-year-old My Black Is Beautiful initiative, is introducing a project that is surprisingly ambitious even by the consumer goods giant’s standards.

On Sunday, Procter & Gamble will present a screening of “Imagine a Future” in conjunction with the Tribeca Film Festival. The film, which aims to empower African-American women, features Janet Goldsboro, a teenager from Dover, Del.

“I didn’t look like what I saw in a magazine,” Ms. Goldsboro says about her childhood in the documentary. “I look different from all my cousins. I had dark features, dark hair, dark eyes, big nose and big lips, and I used to get made fun of because of how I looked.”

She says that she is “into boys” — and that their remarks can sting.

“Boys say, ‘I like the light-skinned girls,’ or, ‘I like white girls because I want my baby to come out pretty,’ ” Ms. Goldsboro says. “And that hurts you because it makes you feel like you’re ugly looking.”

The documentary is co-directed by Shola Lynch, whose documentary “Free Angela and All Political Prisoners” about Angela Davis is in theaters now, and by Lisa Cortes, who also produced the documentary and who was an executive producer for the Oscar-winning movie “Precious.”

The filmmakers found their subject through Black Girls Rock!, a Brooklyn nonprofit with programs including a summer leadership camp that Ms. Goldsboro attended last year. Procter & Gamble supports the organization financially through My Black Is Beautiful.

Interspersed with footage of the teenager, who visits South Africa, are interviews with women including Michaela Angela Davis, the writer and cultural critic; Gabby Douglas, the Olympic gymnast, and Melissa Harris-Perry, the MSNBC host.

Ms. Lynch, the director, was dubious when Ms. Cortes first approached her about the documentary.

“Lisa came to me and I was like, come on, Procter & Gamble is going to let us tell this story the way we want to tell it?“ Ms. Lynch said.

“It was known that this wasn’t going to be a puff piece,” Ms. Cortes added of the 30-minute documentary, which explores how media images of rail-thin white women as a standard of beauty can make black women, particularly curvy ones, feel inadequate. “P.& G. has not just been a supportive collaborator,” Ms. Cortes said, “but has really given us creative freedom.”

In the documentary, Ms. Goldsboro visits a market in Johannesburg with Lebogang Mashile, a poet, actress and activist, and says, “I heard that in South Africa that skin bleaching is a big problem here?”

Ms. Mashile replies: “It’s been a problem for a long time. It’s self-hate, it’s not having enough mirrors that affirm you.”

The documentary does not mention that Olay, a Procter & Gamble brand, markets skin-lightening products all over the world. A line called White Radiance is sold in countries including Malaysia and Singapore; another, Natural White, is sold in India, United Arab Emirates and elsewhere.

In South Africa, Olay recently introduced a skin-lightening line called Even & Smooth. A new commercial features Gail Nkoane, a singer and actress, who applies the product and is instantly bathed in light, giving the effect of her skin becoming several shades lighter.

Efforts like My Black Is Beautiful represent a “new trend among cosmetics corporations to use language that critiques the domination of white beauty standards in order to sell new products to women of color,” writes Margaret Hunter, an associate professor of sociology at Mills College in Oakland, Calif., in an article in The Journal of Pan African Studies in 2011.

The new documentary is “very engaging and very thought provoking about racism,” Professor Hunter said in an interview after viewing it. “But it’s Procter & Gamble, meaning that some of the money behind the documentary is made off products including skin-lightening products, and that completely undermines and inverts that message.”

Asked about its skin lightening lines, the company issued a response.

“These kinds of products are very popular in Asia and are designed to help women address uneven skin tone, and dullness which may be caused by acne, skin discoloration issues, or over exposure to the environment and help restore the skin’s original tone,” the statement read.

In a 2009 report about marketing to black women, market research firm Mintel noted that during the 1950s, whitening creams were marketed in the United States with “after” photographs featuring lighter skinned women, but such an approach became taboo in the 1960s, when “cosmetic companies began to emphasize the blemish-fading properties of bleaching creams and de-emphasize the ‘light skin is better’ strategy.”

Procter & Gamble in its statement stressed that it does not market White Radiance and Natural White in the United States, but those products are nonetheless available through multiple vendors that import the products on Amazon.com.

“Imagine a Future,” which is not officially part of the Tribeca Film Festival but rather being screened to coincide with it, will appear on Black Entertainment Television on July 7, and will be posted to YouTube.

Imagine the Future also is the name of an initiative introduced in 2012 that promises to have a positive impact on one million black girls by 2015. The effort is a partnership of My Black Is Beautiful, which Procter & Gamble began in 2008, the United Negro College Fund and Black Girls Rock!

“There is a need to celebrate black beauty and support diversity, and all of our brands view the African-American consumer as a very important consumer,” said Lauren Hoenig, associate marketing director for multicultural marketing at Procter & Gamble. “We know we have to win with African-Americans in order to win.”

Email ThisBlogThis!Share to TwitterShare to FacebookShare to Pinterest
Labels: beauty standards, my black is beautiful, procter and gamble