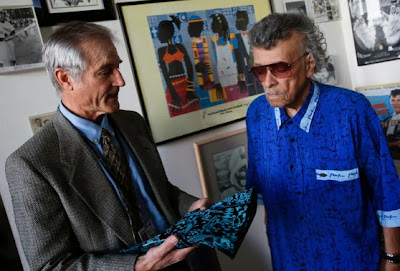 Saying thanks to onetime DJ for a favor done long ago

In 1968, rhythm and blues DJ Tom Reed, known as the Master Blaster, visited a church youth club in Altadena. A token of the youths’ appreciation took 45 years to deliver.

Master Blaster sounded a little put off when I called to ask if I could bring him a gift.

The gift was a Japanese robe that a reader had entrusted to me to give to him. It wasn’t the so much the robe itself — or the story behind it — that distressed him as it was my request to bring a photographer to record the event.

The Master Blaster informed me he didn’t do kitsch. “I’m just myself,” he said.

Only a few days earlier, I had written about Tom Reed, a.k.a. the 1960s rhythm and blues DJ whose broadcast name was the Master Blaster. After leaving radio Reed reinvented himself as a historian of black Los Angeles, especially its music.

I knew that dedication to the story of black L.A. and to his documentary craft meant much more to him than a quaint story from the distant past.

But I finally persuaded him that the robe represented a duty I could only discharge in person.

The robe came to me from a man who had kept it for 45 years.

The story started at the First Presbyterian Church of Altadena in 1968. Though the church was largely Japanese American, the members of its youth club attended predominantly black public schools and listened to rhythm and blues broadcast over KGFJ.

Club president Gary Mikuni fulfilled a huge wish by club members when the Master Blaster agreed to speak to them.

Mikuni needed an appropriate gift. His mother, the owner of Yamato’s tourist agency, which still operates in Little Tokyo, came up with one. She had brought a robe back from a trip to Japan.

It was black with a yellow lining, embroidered in cobalt blue with scenes of mountains, streams, deer, birds, flowered trees and pagodas.

“It was too showy for a Japanese person,” Mikuni said. “We thought it would be good for the Master Blaster.”

On the day of the speech, Mikuni had the robe in his hands when he was called away on another matter. He doesn’t remember what it was. All he remembers is that when he returned, the Master Blaster was gone, and he was left holding the robe.

There are many ways of dealing with this situation. Mikuni chose what must be the least likely. He put the robe away, telling himself that one day an opportunity would arise to deliver it.

Through high school and college, Mikuni had too much else on his mind. Then came marriage and children. By then the Master Blaster had departed KGFJ. Mikuni had no idea where to find him.

Others in this situation might have found an opportunity to give the robe away, or even break it out and wear it. Not Mikuni. Even following a divorce he took the robe with him, still in its original plastic wrap.

Then, he read my article on Tom Reed. He emailed to ask if I could help deliver the gift.

Mikuni received me in his Pasadena condo. He spoke easily about his children, his amicable relations with his ex-wife, his mother’s refusal to give up work and even his grandmother’s bitterness about the relocation camps of World War II.

But he wasn’t particularly expressive about himself. He’s a semi-retired estate planning attorney. His clients won’t let him off the hook, he said.

He proudly showed me his framed class photo at Washington Junior High School — a few small circles of white and Asian faces among the rows of black ones.

I tried several times to get him to say why he had kept the robe so long with any realistic prospect for delivering it long lost in the past. The best I could get was that he was its custodian, not its owner.

“It’s your burden now,” he said as I left his condo.

I pleaded with Reed to meet me so I could close this circle of 45 years. As I handed him the robe, Times photographer Anne Cusack recorded the moment.

It was a bit awkward. Reed was clearly not comfortable with the forced nature of the event. In some way, the object seemed to be a connection to a period that he has put in his past.

I left unsure whether he would save it as a souvenir, wear it or give it to Goodwill.

That would be his choice. I had relieved Mikuni’s burden and also my own.

A few days later, I opened the trunk of my car. The belt that went with the robe had somehow slipped out of the plastic wrapper.

It sits on my desk.