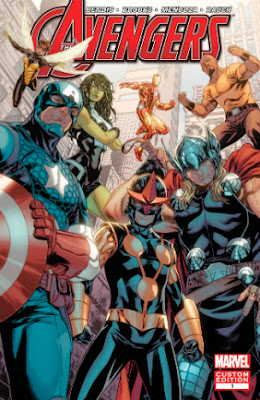 Advertising Age reported on the latest initiative to come from BBDO’s Diversity Council: a Marvel comic book hyping the importance of inclusion. Is BBDO’s Diversity Council part of the Omnicom Diversity Development Advisory Committee? Gee, these agencies are creating a veritable Justice League of Delegating Diversity. The comic book, not surprisingly, fails to mention the real villains on Madison Avenue still perpetuating exclusivity. Rather, it’s a partnership between BBDO and New York’s Police Athletic League designed to aim a positive message towards kids. Why does the advertising industry consistently ignore addressing its own ranks regarding diversity, opting to target children instead? Wonder what the youngsters would think upon discovering the comic book creators—namely, the majority of staffers at BBDO—more closely resemble Mad Men versus X-Men.

Diversity can be a tough issue to tackle—but it helps when you have The Avengers to back you up. That’s the thinking behind a partnership between BBDO and Marvel to create a custom comic book “Avengers: Heroes Welcome.”

The title is an initiative of BBDO’s Diversity Council, and ties into an education and distribution program aimed at kids through New York’s Police Athletic League and online. It features the young hero Nova, who questions the notion of heroes in a world plagued by strife and approaches more seasoned heroes like Iron Man, Thor, She-Hulk and others for advice.

The comic book, which coincides with Marvel’s 75th anniversary, was actually years in the making and was one of the first ideas to come out of BBDO’s Diversity Council when it was formed in 2006 to promote an ethos of acceptance across the agency’s culture, business practices and beyond. “It’s not a black, white or an age thing,” said BBDO New York President-CEO John Osborn, who founded the council. “It’s totally about acceptance and inclusion and it’s not just the right thing to do, it’s the right thing for our business.”

Shifts in the economy put the project “on the back burner, but we kept focus and took whatever steps we could toward an eventual completion,” said JD Michaels, senior VP-director of tactile production and creative engineering as well as a founding member of the council. “We didn’t give up on it.”

Mr. Michaels has helped steer the project throughout. “I’m African American, and when I was a kid, many of the stories I read about Marvel Heroes helped me,” he said. “They were regular people but had super powers and went through all the things I went through.”

The comic book that finally resulted is an evolution of a tale written eight years ago—one of four the agency originally thought up around various Marvel heroes.

“The relevance of a comic book that talked to kids about gender and race before the Obama Presidency was one world,” Mr. Michaels said. “Today’s world is a little different. Culture has shifted and we wanted to make sure this effort was less defensive and more inspirational.”

The popularity of certain Marvel characters has also skyrocketed thanks to Hollywood in the time since the original idea, so Marvel built out the new cast to pull in certain heavyweights alongside characters reflecting some diversity, such as She-Hulk and African American hero Power Man.

Although this was a custom title, Marvel tapped one of its top writers, Brian Michael Bendis, an Avengers and X-Men vet who also co-created “Ultimate Spider Man,” as well as one of its most popular artists, Mark Brooks, who has illustrated for X-Men, Avengers and Spider Man titles.

For now, BBDO and Marvel have no plans to release a follow-up, but if the comic book sparks more conversation, “this may be the first step in something that may have a longer shelf life,” said Mr. Osborn.