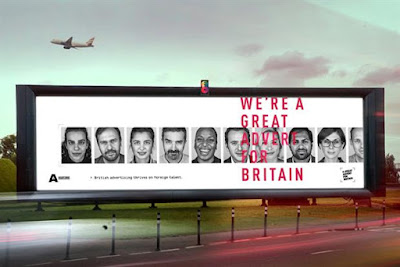 Campaign published peculiar posturing on diversity that was probably planned to be powerfully provocative, but comes off as patently poopy. Veteran adman Paul Burke proclaimed that embracing diversity demands embracing diversity of opinion, and an influx of non-Whites could lead to a tsunami of conflicting viewpoints. Burke believes White advertising agencies that integrate “more women, more people from poorer backgrounds and from ethnic and LGBT communities” must be prepared for more politically-incorrect perspectives. Huh? While Burke likely sought to advocate for inclusion, the essay seems to subliminally play into the fears associated with a diverse workforce—that is, ad shops will have to undergo extreme, fundamental transformations in order for diversity to succeed. Heaven forbid positive change might occur without dramatic disruption. Sorry, but equality is only a threat to racism.

You say you want diversity, but what about diversity of thought?

Imagine that you’re an “industry leader” and a prominent proponent of diversity. Imagine you have the standard-issue box set of establishment-approved liberal values, which you frequently espouse in Campaign and on social media. (Some of you won’t have to imagine too hard.)

Obviously you despise Donald Trump, and have tweeted your hilarious observations, comparing his hair to candyfloss and his face to a tangerine. You’ve earnestly re-posted Guardian articles attacking Brexit or, let’s be honest, attacking the people who voted for it. And you’ve nobly supported #MeToo, even though the list of miscreants who’ve behaved inappropriately towards colleagues might well include #YouToo.

That said, you now have a sincere and genuine desire to see a more diverse cross-section of people employed in advertising.

For example, how will you react to members of staff who think the EU is corrupt and old-fashioned and its blatant protectionism prevents economic growth in Africa?

Or those who think Donald Trump is the ultimate ad man and his use of Tweets and sound bites quite brilliant. His “comms” strategy made him the most powerful man on the planet, they say, so surely we have something to learn from this.

Will you approve of the ardent feminist whose role models are Margaret Thatcher and Theresa May?

Or the female team who don’t want their commercials to routinely portray women as smarter and sassier than their hapless male counterparts? They have boyfriends, brothers and fathers whom they adore, and they’re not comfortable with seeing them represented like this.

Meanwhile, how will you defend that much-lauded new Nike ad to an Asian kid from Tower Hamlets who sees his own community seemingly air-brushed out of it? He thinks it fails to reflect the “diversity” of young Londoners. In fact, he says, it does the very opposite.

And will you hire that proudly right-wing graduate who wants to work in advertising because she admires its clarity of purpose: to make as much money as possible by actively capitalising on capitalism?

I’m not saying these particular views are right or wrong, but they would certainly now fall on the “wrong” side of a political and cultural paradigm. They’re rarely expressed in agencies, even though they’re undoubtedly held by a fair proportion of the people whom advertising is supposed to reach, reflect and represent. Agencies may claim they want diversity of talent, but they no longer seem so keen on diversity of thought.

Yet isn’t that the very essence of advertising? The different ways of looking at the world, looking at problems and looking at briefs? What first attracted me to agency life was its random selection process, which always seemed to throw up a varied cast of unusual and original thinkers, who were then allowed the freedom to express their thoughts without fear of censure. It was their disparate opinions that inspired the crucibles of creativity that powered the whole industry.

Take that away by enforcing just one predictable brand of “virtuous” views and values, and what do you think is going to happen? All those diverse and interesting people may decide that working in advertising will be like living in a never-ending episode of W1A and they’ll take their talents elsewhere. So ironically, those who so volubly championed diversity might be the very people who destroy it.

As an industry, we need to make our work interesting, relevant and original. This looks under threat from senior people more interested in signalling their glistering virtue than in fostering unconventional ideas. What we need now are people who’ll provide a more vibrant variety of viewpoints. More women, more people from poorer backgrounds and from ethnic and LGBT communities, but not if we’re going to try to tell them how to think.

Paul Burke is an award-winning copywriter and novelist.