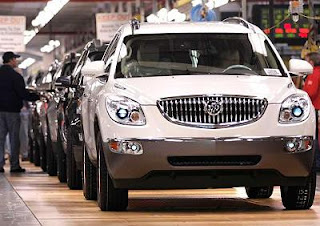 The Associated Press reported that General Motors is back in the black. Despite having dumped its Black advertising agencies. Nice.

GM back in the black
Automaker posts quarterly profit, but can it sustain success, repay feds?

General Motors Co., once a symbol of U.S. industrial might, would have disappeared late in 2008 or early last year without help from the government.

But in less than a year, GM has roared back from bankruptcy to a quarterly profit. Now comes the hard part: sustaining the income and repaying billions of dollars in government aid.

There are signs GM is on track to do just that. Revenue is up 40 percent over the first quarter of last year. U.S. sales rose 17 percent for the quarter, and the automaker made an operating profit in North America, which had been a cash incinerator. Units in Asia and Latin America posted strong numbers, too.

GM announced Monday that its net income rose to $865 million, a dramatic reversal from the $6 billion it lost in the same period last year. “Today’s news was wonderful, and even better than we ever expected,” said Steven Rattner, former head of the Obama administration’s Auto Task Force.

To keep GM afloat and get it through bankruptcy court, the U.S. government gave the company $50 billion. GM repaid $6.7 billion that the government considered loans, with the remaining $43.3 billion converted to a 61 percent stake in the automaker.

For GM to pay off shareholders, including the government, a United Auto Workers union health-care trust and its old bondholders, the stock market would have to value it at more than $70 billion, almost double Ford Motor Co.’s market value of roughly $40 billion, but far less than Toyota’s $120 billion market value.

Analyst Eric Selle of JPMorgan Chase predicted last month that a GM stock sale could reach about $70 billion, selling at $113 to $137 a share.

Chris Liddell, GM’s chief financial officer, would not say Monday when an initial public offering might take place, but he was cautiously optimistic this year will be profitable.

Also Monday, the Treasury Department said it will lose $1.6 billion on a loan made to Chrysler in early 2009. In all, the government loaned Chrysler $7 billion as part of a total $12.53 billion bailout.
Posted by HighJive at 11:27 AM