8715: Going Into Overtime With Kobe Bryant. 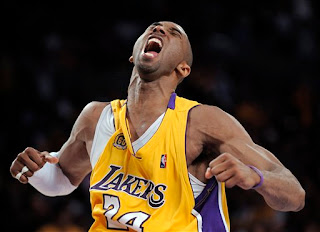 Did anyone else watch Kobe Bryant take a nasty tumble in the opening NBA Playoff game and think it was karma and/or Higher Power payback for his anti-gay slur? After bashing his noggin on a courtside chair or spectator’s knee, did the Lakers guard bark bigoted names at the team trainer or fan? Probably not—and that’s the main problem with Bryant’s earlier disgusting and discriminatory display.

As often happens during these types of fiascos, people snarled that the Kobe haters were overly sensitive, politically-correct liberals. Or worse. Of course, these condemning critics never consider the possibility that they may be revealing insensitivity, political incorrectness and Tea Party tendencies. Or worse.

Bryant entered the league in 1996. He is a professional athlete—accent on professional—who should completely understand that lots of cameras are recording his every move and mouth-off while in the stadium. What was Bryant attempting to do by hollering at the referee to begin with? Does he believe he is so entitled that officials ought to halt a game and contemplate his opinion on anything?

Remember, the arrogant All-Star didn’t merely utter an anti-gay slur. It was preceded by the F-bomb, which Bryant should also know is a big no-no during broadcasts. Please don’t insist that the proposed penalty is too excessive. As the man earns about $25,806,250 per season—and tons more in endorsements—the $100,000 fine is like Joe Public dropping a few dollars into the company swear jar.

Bryant is fluent in multiple languages. Plus, he is extraordinarily articulate for an athlete. He picks his words carefully. The superstar has joked about cussing at refs in Serbian. He had a wide variety of naughty phrases at his disposal, yet his ultimate selection mirrored the eruptions of Michael Richards, Don Imus and Mel Gibson.

Yes, Bryant has a reputation for arguing with officials. But no one has ever suggested he attend anger management training like, say, teammate Ron Artest. The presumption is that Bryant is in control. He’s aware of what he does and says.

Bryant responded in ridiculous fashion after causing the initial stir. He said, “The comment that I made, even though it wasn’t meant in the way it was perceived to be, is nonetheless wrong, so it’s important to own that.” However, he’s appealing the $100k fine.

Bryant added, “The concern that I have is for those that follow what I say and are inspired by how I play or look to me as a role model or whatever it is, for them not to take what is said as a message of hate or a license to degrade or embarrass or tease. That’s something I don’t want to see happen.” Um, hurling vulgar slurs at an official is disrespect—which could fall into the same category as degradation, embarrassment or teasing.

And like it or not, with his choice of curses, Bryant appeared to show latent homophobia. You don’t need a referee to call it.
Posted by HighJive at 12:48 AM