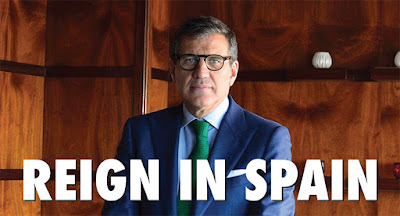 Adweek reported ex-JWT Worldwide Chairman and CEO Gustavo Martinez is serving as country manager for WPP Spain. Meanwhile, Erin Johnson is sitting in a cubicle outside of the HR Director’s office. So now who’s getting raped—and not in a nice way?

This week, Gustavo Martinez made his first public appearance as the leader of WPP’s operations in Spain more than 18 months after stepping down from his role as global CEO and chairman of J. Walter Thompson amid a sexual harassment and discrimination suit filed by that agency’s global head of public relations, Erin Johnson.

According to a report published in the Spanish trade journal Dircomfidencial, Martinez spoke Wednesday on behalf of the holding group at Orbit, an event organized by the Barcelona offices of WPP-owned firms Hill+Knowlton and SCPF.

Martinez spoke about newfound competition from international consultancies like Deloitte and Accenture. A translation of his comments reads, “When I started in this sector, PwC, Arthur Andersen and Accenture were auditors; today they are my competitors. Before, people like Google were providers; today, my boss Sir Martin Sorrell calls them ‘frenemies.’ But I think they are less friends and more enemies.”

The report also states that Martinez has served as country manager of WPP Spain since being promoted in January.

The report may conflict with claims made last week by Martinez’s law firm Wilson Elser Moskowitz Edelman & Dicker, which stated in a Manhattan federal court filing that Martinez has been working for WPP on an “ad hoc” basis in an unspecified role since leaving JWT in March 2016 “following his discussions with Sir Martin Sorrell when [Johnson’s] litigation was filed.”

During Wednesday’s event, Martinez also revealed that he is overseeing a reorganization of WPP’s operations in Spain. “We are re-creating the company itself,” he said, adding, “We can no longer do silos or separate business units.”

WPP and Sorrell have largely stood behind Martinez in the wake of a suit that accused him of “an unending stream of racist and sexist comments” that allegedly made Johnson’s job running global communications for JWT “virtually impossible.” He and his lawyers have denied each of the specific claims in the suit filed by the law firm of Vladeck, Raskin & Clark with two exceptions. In April, Johnson’s team submitted a video of the former CEO joking about being “raped … and not in the nice way” at a 2015 company meeting in Miami. The previous month, former Campaign editor in chief Douglas Quenqua confirmed that Martinez had said he and his wife moved out of New York’s Westchester County because it had “too many Jews.”

Johnson’s lawyers have repeatedly requested that Martinez return to New York for continued depositions and provide more information about his current compensation as a WPP employee. They have also implied that, by continuing to employ Martinez, the holding group is effectively condoning the behavior of which he’s been accused. The Martinez team countered those claims last week. “[Johnson’s] argument that Defendant Martinez’s continued compensation evidences [WPP’s] failure to remediate or prevent sexual harassment is baseless,” its filing read, because he “ended his employment with JWT … and left the country.”

The document also stated that his current compensation is irrelevant since he no longer receives bonuses and other benefits that he earned as CEO and chairman of JWT, even though he is “paid the same base rate” by WPP.

In a filing last Friday, the Johnson team argued that the law firm of Davis & Clark, which represents the larger WPP organization, has attempted to slow the case to a near-standstill by declining to make Sorrell available for the requisite seven hours of depositions, stating that he is “too important and too busy” and “refus[ing] to produce him” even after Sorrell himself “agreed without hesitation to continue at a later date.”

They also pointed to last week’s scheduled deposition with JWT chief talent officer Laura Agostini, which was canceled with “virtually no notice” after the team’s own legal counsel “decided to take the day off.”

A WPP spokesperson has not yet responded to requests for comment today.