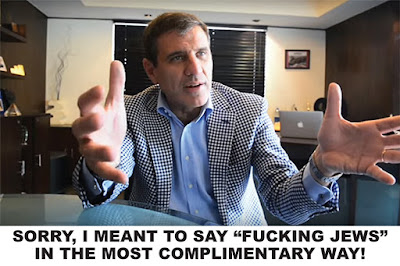 Campaign reported former JWT Worldwide Chairman and CEO Gustavo Martinez officially denied almost all of the accusations directed at him in the discrimination lawsuit filed by JWT Chief Communications Officer Erin Johnson. Specifically, Martinez confirmed making his “too many fucking Jews” in Westchester County comment, but insisted he had “attempted to communicate that he and his wife wanted to live in a diverse community.” Oh, so now Martinez is a diversity crusader. Expect him to nab an ADCOLOR® Award soon. And since when is anti-Semitism less offensive than sexism and racism? Would Martinez also get a pass for declaring there are “too many fucking Blacks” in Brooklyn and “too many fucking Hispanics” in the Bronx? BTW, how many fucking Jews are currently working at JWT? How was Martinez working to transform his former fucking agency into a diverse community?

Additionally, Campaign reported that after Martinez made arguably racist—and rapist—comments at a Miami meeting, JWT Global Chief Talent Officer Laura Agostini and JWT Chief Creative Officer Matt Eastwood counseled their ex-boss about avoiding the use of “rape” in public statements. Of course, the officers apparently didn’t have any suggestions regarding Martinez’s culturally clueless comments involving Blacks.

Gustavo Martinez formally denies all allegations, except one

The former JWT CEO says his “too many Jews” comment was meant to convey his desire to live in a more diverse community.

Lawyers for Gustavo Martinez, the former chairman and chief executive of J. Walter Thompson who resigned in March amid allegations of sexist and racist behavior, has formally responded to the lawsuit filed against him by chief communications officer Erin Johnson.

In the 23-page document filed in Manhattan federal court Tuesday night, Martinez denies every substantial accusation of discriminatory behavior, except one.

In Johnson’s discrimination lawsuit, filed against Martinez on March 10, 2016, the PR chief claimed that her boss—in addition to engaging in an “unending stream of racist and sexist comments” around the office—had met with an industry journalist in February 2016 and “told the reporter that he disliked living in Westchester County because there are ‘too many Jews.’”

In a column that same day, Campaign US editor in chief Douglas Quenqua identified himself as the unnamed journalist in question. He recalled hearing Martinez make the comment, he said, but assumed he had misheard, partly because of Martinez’s accent. The comment was made before the recorded portion of the interview, said Quenqua. In the document filed Tuesday night, Martinez confirmed that the meeting had taken place, and did not deny that he had made the comment. Instead, he sought to clarify his meaning, saying he “attempted to communicate that he and his wife wanted to live in a diverse community.”

In a separate document filed Wednesday morning, the law firm of Davis & Gilbert, representing WPP and JWT, made a similar clarification regarding a conversation that Johnson alleges took place during a work lunch with Laura Agostini, JWT global chief talent officer, and Tarun Rai, CEO of Southeast Asia, in London in February 2015. In Johnson’s complaint, she claims that Martinez told the group that he and his wife “hated” living in Westchester because it was cold and because he “hate[s] those fucking Jews” (a statement he felt free to make “because he was in Europe,” according to Johnson’s suit). According to the WPP document filed Wednesday, Martinez actually said “that his wife also hated Westchester because she was from Europe and not Jewish, and she felt that the community in Westchester was cliquey.”

Both Martinez, who was born in Argentina and grew up primarily in Spain, and co-defendants WPP and JWT have made the former CEO’s alleged discomfort with English a lynchpin of their defense, repeatedly asserting that his comments were not meant as sexual or derogatory. In Martinez’s response filed Tuesday, he states that a meeting between he and Johnson on May 20, 2015, in which she claims Martinez became “angry and aggressive” when she told him his comments about rape were unacceptable, was simply “part of plaintiff’s job regarding his communications and language limitations [because] English was not his first language.”

Last year, when the two sides were debating whether a video of Martinez making a joke about being raped, “and not in a nice way” during an internal JWT meeting in Miami should be admitted as evidence, lawyers for WPP claimed he was only trying to ease the tension in the room because a wild party the night before had unnerved many of the employees, but he was stymied, in part, by his unfamiliarity with the language. “No one should fault Mr. Martinez (for whom English is his fourth language) for at least attempting to address with some humor the events that the employees had experienced,” said the lawyers.

Much like Martinez’ s filing, today’s WPP document also denies the bulk of Johnson’s allegations. In one notable denial, the company counters the PR chief’s assertion that Agostini never took action regarding Martinez’s behavior. “[B]oth Agostini and [JWT chief creative officer Matt] Eastwood spoke to Martinez after the Miami meeting and counseled him that he should not use the word ‘rape.’”

In December, US District Judge Paul J. Oetken rejected WPP’s motion to dismiss the suit, saying that Martinez’s actions created “a workplace cut through with hostility.” He had initially given the defendants a deadline of Jan. 3rd to respond to Johnson’s accusations, but later extended the deadline to Jan. 11th.

Following an eight-month paid leave of absence, Johnson returned to work at JWT on Nov. 2nd. Though she sought an injunction shortly after she returned to stop the “highly visible punishment” she was allegedly being subjected to in the office, Johnson’s lawyers, Vladeck, Raskin & Clark, have since abandoned that request in order to proceed more quickly to trial. WPP’s lawyers have denied the veracity of the claims made in the injunction request.

Prior to the lawsuit:
"Gustavo Martinez is the very epitome of diversity for our agency, speaking a whirlwind four global languages and extremely prepared to lead us around the globe because of his deep international expertise."

After the lawsuit:
"He no speak English good. Bad, bad Gustavo! Bad English. No good speaker, that why he make black person rape jokes."