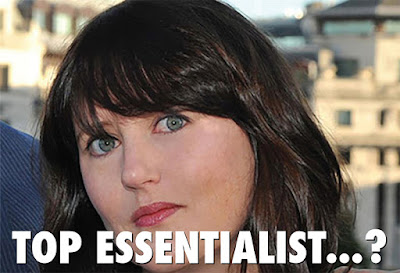 Campaign placed JWT Chief Communications Officer and Discrimination Whistleblower Erin Johnson at the No. 1 spot on “The 10 Essential Advertising People of the Year.” Gee, Johnson has become the Rosa Parks of diverted diversity in the advertising industry. According to Campaign, “The ad industry thought it had come a long way since the days of ‘Mad Men.’ But an explosive discrimination suit filed against one agency’s global CEO blew that pretty presumption out of the water this year and dragged an ugly truth out of shadows—the agency world can still be a very unfriendly place for women and minorities.” It’s amazing that Campaign considers itself a legitimate trade journal, as the average informed person recognizes quite clearly that the ad industry has not evolved much since the “Mad Men” era—and Madison Avenue is still chronically unfriendly to minorities. Sorry, but the discrimination that White women allegedly face is a veritable country club experience compared to the bullshit that minorities have endured. Yet Campaign—mirroring the rest of adland—has been quick to jump on the White women bandwagon, pushing true diversity to the back of the bus. Which sorta makes Johnson more like James F. Blake than Parks.

Campaign also claimed Johnson’s lawsuit created “ripple effects” including the dubious demands from General Mills and HP, as well as the launch of Free The Bid and the downfalls of Kevin Roberts and Alexei Orlov. Wow, Johnson is definitely a candidate for an ADCOLOR® Award. It’s a wonder her mighty efforts weren’t enough to catapult Hillary Clinton into the White House.

Of course, diverted diversity diva Cindy Gallop threw in her two cents, for which she’ll receive no compensation: “Erin Johnson’s outstanding bravery in filing a lawsuit against JWT when every other recourse had failed, emboldened women and people of color to speak up about the ingrained sexism and racism that has been holding our industry back for far too long. Our clients miss out on our best work when they miss out on the talent and creativity of women and POC. I hope this lawsuit changes that forever.” Well, bigger legal actions than this have failed to put a dent in diversity. And to be accurate, Johnson has not “emboldened…people of color to speak up” about anything—except to complain that true diversity is being ignored in favor of promoting White women.

The 10 Essential Advertising People of the Year: No. 1 Erin Johnson

Her explosive discrimination suit against JWT and its former CEO cracked open the conversation on gender bias and harassment.

For better or worse, 2016 was a landmark year in advertising. To mark its conclusion, Campaign US is highlighting 10 people we believe are essential to understanding how it all went down. Click here to see the list.

The ad industry thought it had come a long way since the days of “Mad Men.” But an explosive discrimination suit filed against one agency’s global CEO blew that pretty presumption out of the water this year and dragged an ugly truth out of shadows—the agency world can still be a very unfriendly place for women and minorities.

In March, Erin Johnson, an 11-year veteran of J. Walter Thompson and the agency’s chief communications officer, hit Gustavo Martinez, JWT and its holding company, WPP, with a bombshell lawsuit claiming the former CEO had “subjected Johnson and other employees to an unending stream of racist and sexist comments as well as unwanted touching and other unlawful conduct.” According to the complaint, Martinez routinely made references to rape in the office, directed at Johnson and other female staffers. And a video recording of Martinez, who resigned a week after the case was filed, was submitted to the court showing the executive making a joke about being raped “not in a nice way” at a company meeting.

The suit painted a picture of an agency leader who was openly hostile toward women, alleging that during a meeting Martinez once told an employee that a female executive needed to be “hogtied” and “raped into submission.” But it wasn’t only “bossy boss” women like Johnson who were on the receiving end of Martinez’s bad behavior, charged the suit. It was “black monkeys” and “fucking Jews,” too. As head of PR, Johnson had found it impossible to do her job, argued her lawyers. His repeated jokes about rape and his racist remarks were indicative of a hostile work environment, they argued, and it was also a potential PR nightmare that Johnson had attempted to avert by alerting company management, including the agency’s head of talent. And the agency failed to respond, they said.

With a 30-page suit filed in Manhattan federal court, Johnson threw the industry’s gender and diversity issues into stark relief and kick-started an industry-wide conversation that was long overdue. The fact that there aren’t enough women in leadership positions had been safely debated in recent years, but sexual harassment and discrimination was still a subject relegated to hallway whispers and locked behind closed doors.

There wasn’t an industry event in 2016 that didn’t address the subject of women in the workplace, noted Nancy Hill, president and CEO of the 4A’s. “The level of discourse this year increased tenfold,” she said. “There were several incidents that took place. Right, wrong, or indifferent, in terms of how you feel about them, they elevated the number of people who were willing to say what is going on in the industry isn’t right.”

Hill declined to specifically discuss Johnson or JWT, but she did take one holding company executive to task about the subject at the 4A’s Transformation conference in March. When asked on stage whether he believed the JWT case had exposed a larger industry problem, Maurice Levy, the CEO of Publicis Groupe, characterized it as an isolated mistake and Hill, following his appearance, made it clear she did not agree. “It’s one of the reason’s we did the study we did,” said Hill. “So nobody can point to any one incident and say it is an isolated incident. The feeling of the women in the industry is that it happens on a pretty regular basis.”

The study to which Hill refers found that more than 50 percent of women at ad agencies reported being sexually harassed at least once in their careers, and 58 percent of female creatives reported they experience sexual harassment “often.”

The conversations sparked by the Johnson case is a “silver lining,” said JWT New York CEO Lynn Power, during an Advertising Week panel about creative diversity programs. “This conversation that needs to happen. It’s a good thing that we’re talking about it.”

The ripple effects from Johnson’s filing reverberated throughout 2016. Diversity became the year’s dominant issue, with General Mills and HP, among others, eventually demanding that their agencies make more female and diversity hires. “Free the Bid” mobilized support behind female directorial and production talent. In July, Kevin Roberts’ career ended just days after he made controversial comments about women in the press, showing just how low tolerance on the issue had become. And at least one other discrimination lawsuit was filed against one more agency leader accused of atrocious behavior: In May, Greg Anderson filed a discrimination suit against former RAPP global CEO Alexei Orlov, claiming he was fired after he complained about the CEO’s racist and sexist conduct.

Nine months after Johnson filed her suit, her case is making its way through the federal legal system. Martinez, who denies the allegations, has moved back to Europe and continues to be employed by WPP. And Johnson, back at work at the agency after a leave of absence, has filed a motion for a temporary injunction, claiming she is suffering “highly visible punishment” in the office. While the judge, J. Paul Oetken, has yet to make a ruling as to whether to issue the order, he has denied WPP’s motion to dismiss and has moved the case on to the discovery phase in preparation for a trial.

Whichever way the case ends, one thing is clear: 2016 will be remembered as a pivotal year for women in advertising. “I have had more than one man say to me ‘I had no idea until this year how bad it was’ and ‘it’s opened my eyes,’” says Hill. “I’m hoping it’s gotten people to wake up and look around.”

Cindy Gallop, former agency executive and diversity champion, is hopeful that Johnson’s actions will have lasting impact. “Erin Johnson’s outstanding bravery in filing a lawsuit against JWT when every other recourse had failed, emboldened women and people of color to speak up about the ingrained sexism and racism that has been holding our industry back for far too long,” said Gallop, in an email. “Our clients miss out on our best work when they miss out on the talent and creativity of women and POC. I hope this lawsuit changes that forever.”

"Erin Johnson’s outstanding bravery in filing a lawsuit against JWT when every other recourse had failed, emboldened women and people of color to speak up about the ingrained sexism and racism that has been holding our industry back for far too long."

White women may have been emboldened to speak up, but nobody of color has been able to do the same thing without serious and immediate consequences to their livelihoods and career prospects.

I've seen more POC leave the industry this year than in any other year prior. They're fleeing for other industries, or going client side, or just plain getting out.

I'd give anything for the Marcus Graham Project to look at the hard numbers of American black men in advertising again, in decision making roles, and compare them to prior years. Then let's see what the 3% crowd has to say about these vast diversity hurdles that have been supposedly overcome.