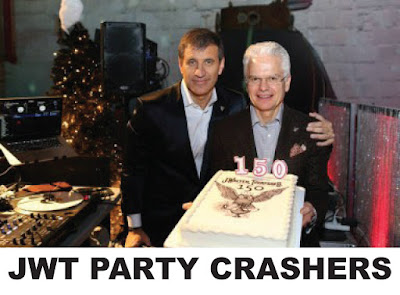 Advertising Age reported Erin Johnson’s discrimination lawsuit will continue after a judge denied a motion to dismiss from JWT and WPP lawyers. Gee, Johnson must be looking forward to the JWT holiday party. And will she receive an annual bonus? Then again, the holiday party will be a drag without Gustavo Martinez to liven things up.

WPP Lawsuit to Grind on as Judge Denies Motion to Dismiss

In the latest development in the ongoing discrimination lawsuit against JWT and parent company WPP, Judge Paul Oetken denied the agency and holding company the motion to dismiss the case.

Lawyers for JWT and WPP filed a motion to dismiss Erin Johnson’s lawsuit against them and now-former JWT Chairman-CEO Gustavo Martinez, citing in part a text message from Ms. Johnson to Mr. Martinez in May. “It is clear that Plaintiff has twisted the facts and distorted the context to contrive gender-based hostile work environment and retaliation claims,” the filing said.

However, on Tuesday, the judge denied all motions to dismiss the case. “Considering the alleged conduct in context, Johnson has pleaded enough to support a plausible inference that an objectively hostile work environment existed,” said Mr. Oetken in a 28-page ruling, according to a previous report by Campaign.

“Motions to dismiss employment cases are not often granted, particularly since the law requires that all facts be presumed for the sake of the argument in a light most favorable to the other side. We remain confident that we will prevail at trial,” said a JWT spokesperson via email.

“We are very pleased with the decision,” Ms. Johnson’s legal team at Vladeck, Raskin & Clark told Ad Age, “and we’re looking forward to finally get to the merit of the case and we’re confident that we will be able to prove Ms. Johnson’s allegations.”

In September, Mr. Oetken approved a move by Ms. Johnson’s attorneys to add Title VII discrimination and retaliation claims to the suit, filed in New York in March over alleged racist and sexist comments by Mr. Martinez. At the time, Ms. Johnson’s legal team told Ad Age that JWT had “totally not” asked for her to return to work. She went on paid leave after filing the lawsuit in March.

I hope this woman causes lasting damage to the agency, and the holding company that's bankrolling the entire fight against her.

The alternative, if they quash her, is the delivery of the clear message that if a white woman with proof on tape (and a reporter's backup of the guy in question being a sleazeball, and other solid proof) isn't enough, nobody of color (and lesser resources, and nobody as willing to go to bat for them as a they will a white woman in advertising) has a chance of changing anything in the industry.