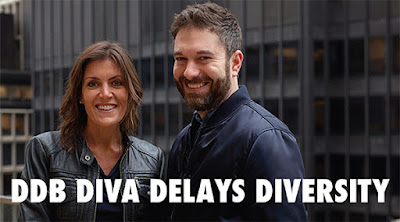 Adweek reported DDB North America named its first Chief Creative Officer, and diversity ambitious DDB CEO Wendy Clark seized the opportunity to hire—drumroll, please—a White man! What’s more, the new CCO is a White man who’s won a ton of White awards—for White advertising agencies with dismal diversity records. Once again, like the We Are Unlimited erection, when Clark is faced with a chance to relieve her restlessness for inclusion, she perpetuates the problem and takes the road well-travelled. It all shows Clark is at least an equal with the White men leading the industry. That is, in regards to diversity, she’s a lying huckster.

Weiss joins DDB from BBH New York where he worked for six years, most recently as the agency’s chief creative officer. In his time there Weiss helped his team score 24 Cannes Lions and worked with clients including PlayStation (he came up with the “Greatness Awaits” line that won BBH the business), Seamless, Axe and Netflix.

Prior to joining DDB, Weiss built his career at agencies including BBDO, Wieden + Kennedy, 180LA, Goodby, Silverstein & Partners and Cliff Freeman & Partners. Over that time he worked on brands ranging from Guinness and Sony to FedEx and ESPN.

Wendy Clark, CEO of DDB North America, said she was looking for someone who had a body of work that was “transformative for the brands he had worked on.” Weiss was the perfect fit. “If you trace his career, everywhere he has gone, good work has followed him,” she added.

Clark joined DDB nearly one year ago and noted that if she had tried to hire someone from the newly-created role when she first started it would have been premature. “I don’t think I could have had a conversation with Ari [Weiss] a year ago and compelled him to join us. We needed to create an environment that had the momentum,” she added.

Beginning in 2017 Weiss will have the opportunity to help DDB create work for some of its newest clients, including McDonald’s, which the agency won in August after a competitive, four-month-long review. DDB took over as creative agency of record from Leo Burnett.

“We’re always looking to make better and better work. That goal never ceases no matter where you are,” Weiss said. “Chemistry is everything and when you find that chemistry you want to put it to the test.”

This has been the fundamental issue with the rah-rah-white-women style of diversity that's so popular in US ad agencies this year.

They extend the first and best opportunities to white men, to prove that they're not showing favoritism to other white women. Then those white men either hire or give a leg up to more white men, or white women.

It creates a closed circle of white people hiring and supporting other white people while celebrating their diversity success, and limiting ethnic diversity outreach to sporadic (but or course highly photographed and documented) inner city high school mentoring programs, scholarships for black and brown teenagers, and hiring the occasional POC teen intern (but not nearly as often as white must-hire interns, of course).