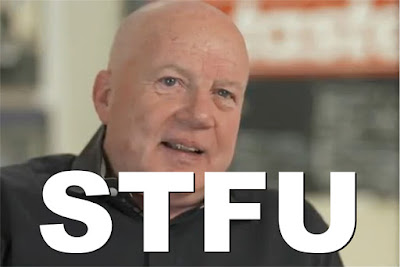 Campaign reported on a recent interview featuring former Saatchi & Saatchi Chairman Kevin Roberts—who puts the “man” in Chairman via his chronic verbal diarrhea over gender equality in the advertising industry. Clearly, the fucking debate is not all over regarding Roberts’ perspectives on the matter. In the interview, Roberts actually offered lame-ass excuses for his alleged miscommunication by remarking, “I was tired, fatigued, in the middle of interview number 4 and was not at my best. Fail.” Somebody once said, “The ultimate measure of a man is not where he stands in moments of comfort and convenience, but where he stands at times of challenge and controversy.” Oh yeah, it was Dr. Martin Luther King, Jr.

Roberts really should consider quietly moving into his multi-million-dollar retirement life. If he needs commiserating buddies, Neil French and Gustavo Martinez are free.

In a “candid” sit-down with TV New Zealand, the former Saatchi & Saatchi chairman says his statements were misunderstood and taken out of context

It’s been four months since Saatchi & Saatchi Chairman Kevin Roberts stepped down after making dismissive comments about gender equality in the ad industry. His position hasn’t changed much in the interim, as he demonstrated in a TV interview that aired on Sunday in New Zealand.

Roberts defended his initial comments from July, when he said “the fucking [gender] debate is all over,” claiming his words were taken out of context. “What I meant was, we should stop debating it and stop talking about numbers and start doing something about it. And I then went on to say Saatchi & Saatchi had 65 percent jobs filled by women, our worldwide creative director was a woman,” he said.

But when reporter Janet McIntyre of TVNZ asked Roberts how important it was for women to be well-represented in leadership roles, he dissembled. “I think the most important thing for society is that we have leaders in the right jobs doing the right things in the right way, whether they are men or women, right?”

Roberts became the center of controversy in July, when he told Business Insider that women are less interested in promotions than personal fulfillment. The implication was that women don’t achieve because they don’t want to. “Their ambition is not a vertical ambition, it’s this intrinsic, circular ambition to be happy,” he said at the time.

The comment ignited a storm of criticism on social media and five days later he resigned. In Sunday’s interview, he repeated the position, expanding it to include men and “millennials in particular.”

Roberts did accept the responsibility for his initial comments, calling his judgment “appalling,” but he noted several times that he wasn’t operating at full strength when he made them. “I was tired, fatigued, in the middle of interview number 4 and was not at my best. Fail.” He didn’t apologize for offending anyone, and he threw in a few digs at the reporting that led to the scandal.

“There’s no one else to blame in this area. I miscommunicated, misspoke, I didn’t mean that, I was taken out of context. Whose fault is all that? Mine,” he said. “I may want to reflect upon sometimes the things that I say are not construed in exactly the way that I mean them,” he added.

Roberts also defended his latest book, “64 Shots: Leadership in a Crazy World.” When McIntyre pointed out that only seven of the 64 inspirational people detailed in the book are women, he waved away the concern. “It never crossed my mind. I’ve never counted them. Having thought about it, I suspect it’s because at the time I grew up in, in many ways, what I was exposed to in working-class England on a popular level.”

When McIntyre suggested it might be a case of unconscious bias, he disagreed. “I don’t think it was a bias at all. I just think it was a choice, an honest choice of people I was exposed to.”

The details of the scandal that led to Roberts’ downfall aren’t mentioned until more than halfway through the 10-minute TV segment. First, viewers get a tour of Roberts’ mansion in Auckland and a peek at his art gallery and collection of sports memorabilia.

Despite recent events, Roberts is doing well for himself as a consultant, and there is little to indicate his positions have changed in any way since he stepped down.

There is no price to pay if you're a white man in advertising who says or does something that perpetuates keeping anybody not a white man on the fringes of the industry.

Kevin Roberts, just like Gustavo Martinez at JWT and Alexei Orlov at RAPP, will continue to be coddled and paid and used as a consultant behind the scenes for years, protected and pampered by the all-white, all-male circle of executives that run the holding companies.