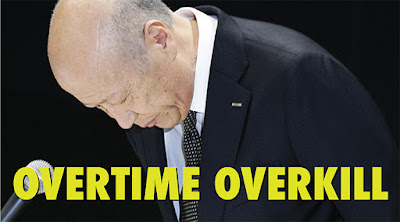 Dentsu chief executive officer Tadashi Ishii announced today that he will resign next month after leading the network for more than five years.

His press conference came less than one day after Japan Times and other local outlets reported that the country’s labor ministry had referred Ishii and the Dentsu organization to federal prosecutors. Officials reportedly recommended filing unspecified charges over the December 2015 suicide of a young Dentsu employee who attributed her own death to a culture of “overwork.”

“I feel deep responsibility as a person overseeing management of the company,” said Ishii as quoted by the Japan Times. “I will take full responsibility and will step down at a board meeting in January.”

Ishii is an industry veteran who appeared on Adweek’s Power List of the world’s 100 most influential marketers in both 2015 and 2016. Tokyo-based Dentsu, which owns the Dentsu Aegis network and once held a 15 percent stake in Publicis Groupe, is the world’s fifth largest holding company by annual revenue. Its agency roster includes such names as mcgarrybowen, Carat, Isobar, Merkle and Posterscope.

The controversy began last December when 24-year-old digital account manager Matsuri Takahashi killed herself after reportedly claiming on social media that she had worked more than 100 hours of overtime in a single month and that her bosses were abusive. Last month, the Japanese labor ministry raided several Dentsu offices as part of an ongoing investigation into the overworking phenomenon, commonly called “karoshi” in Japan. Only days before the raids, Dentsu had announced the creation of a “Working Environment Reforms Commission” to address the matter.

The alleged crimes involved the misreporting of overtime hours in violation of prior agreements between the Dentsu organization and Japanese labor unions.

This is not a new phenomenon. In 2000, the company acknowledged fault in the 1991 suicide of another 24-year-old employee and agreed to pay his family between $1 million and $2 million in a settlement.

Nor was Takahashi’s suicide the only controversy to hit Dentsu in 2016. Early this year, the PR wing of the organization acknowledged a failure to properly label paid promotions, and in September the network’s Japanese performance marketing unit DA Search and Link admitted to “inappropriate operations” related to the alleged over-billing of client Toyota for digital work.

The Dentsu organization has not yet issued a public statement regarding Ishii’s pending departure, nor has it named his replacement. Company representatives had not yet responded to Adweek’s requests for comment at the time this story was published.

And in English advertising news, a panel made up of entirely white executives glosses over any discussion of ethnic diversity, pulls from their “anti-bias” training (spearheaded as always by highly paid white “experts”), takes the broad and ineffective “diversity of thought = true diversity” approach, and insists that diversity is solved by hiring foreigners from OUTSIDE Britain and Ireland (rather than anyone of color from within).