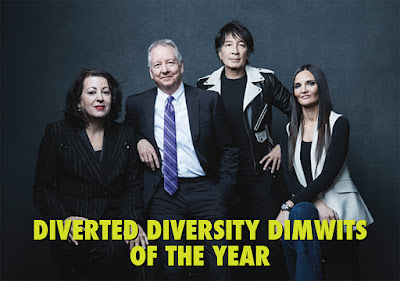 Adweek named Ogilvy “Global Agency of the Year”—and the honor should have included “Diverted Diversity Dimwits of the Year” too. The Adweek article included the following:

Ogilvy also has received kudos for how it fosters diversity in the workplace—a hot topic in the industry in 2016. The agency’s goal is to make its leadership gender balanced in the next five years. Ogilvy works with EY (formerly Ernst & Young) to benchmark its gender-equality practices and with the Geena Davis Institute on Gender in Media on gender-equality initiatives.

“Our industry is good at talking about diversity, but not very good at doing anything about it,” Seifert says. “What will make the biggest difference are metrics: having specific goals, whether it’s ensuring equality among the top ranks, or ensuring equal pay across all salary bands. Goodwill, nice speeches and sending people to conferences is nice, but nothing matters more than setting specific goals and holding people accountable to achieving them.” The new era at Ogilvy will borrow from its storied past and the philosophy of founder David Ogilvy, while meeting clients’ new challenges, its executives say.

Funny, ADCOLOR® Change Agent John Seifert essentially made the same self-critical comments regarding diversity seven years ago. How long can someone admit to talking the talk while not walking the walk? And why is Seifert able to put a deadline and figure on gender equality yet completely dodge racial and ethnic diversity, which has been a problem since before founder David Ogilvy ever joined the field?

Seifert and his team will win more ADCOLOR® Awards, I&C Trophies and kudos from The 3% Conference before actually addressing true diversity.

Does Adweek still charge agencies for the "privilege" of being listed as whatever agency of the year?

Sorry, I mean "purchasing an advertising package of tens of thousands of dollars, which has noooootttthing to do with which agencies get print or screen space, of course."

Because that kind of naturally filters in anyone who needs to clean up any messy PR spills and has deep pockets, and filters out smaller or diverse ad agencies.

The only shock here is that JWT didn't buy themselves an Agency of the Year consideration to make clients forget about the whole Erin Johnson and Gustavo Martinez mess.