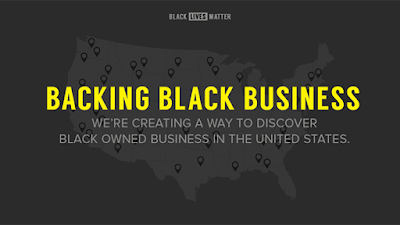 Adweek proclaimed: “JWT Becomes the First Ad Agency to Collaborate Directly With Black Lives Matter.” Sounds like JWT (and WPP) are attempting to score counterpoints against the accusations in the Erin Johnson discrimination lawsuit. Sorry, but JWT partnering with Black Lives Matter is like the KKK celebrating Black History Month. Is Gustavo Martinez significantly different than a Grand Wizard? To make matters worse, the initiative involves promoting Black-owned businesses. In short, a White advertising agency with a history of discriminatory hiring practices that have denied employment opportunities to Blacks is now advocating for Black businesspeople. JWT New York CCO Brent Choi declared, “Our hope is to reduce the racial disparity that exists in economic well-being through the promotion of Black business ownership.” Um, why not just hire a few Blacks, moron?

The official Black Lives Matter organization has entered into a strategic and creative partnership with J. Walter Thompson New York, marking the first such pairing on a formal assignment. The relationship kicked off with the beta launch of Backing Black Business, a web tool that lets users discover black-owned small businesses throughout the country.

JWT New York picked up the pro bono assignment for the nonprofit advocacy group without a review after reaching out to the organization directly.

“[The partnership] started with four creatives who had a passion to support Black Lives Matter,” JWT New York CCO Brent Choi said. “They came up with an idea, and we presented it to them. Through a number of conversations, it became clear that we didn’t just want to offer ideas, but to be a partner to the organization and the movement. We believe in the power of ideas to change behavior, so this relationship became a perfect marriage.”

Choi said the plan involved a long-term partnership, adding, “As the Black Lives Matter cause is ever-changing, our scope will as well. It is open-ended, but our mandate is to create meaningful communications to support Black Lives Matter and their cause.”

Artist and advocate Patrisse Cullors, one of the co-founders of the official Black Lives Matter organization as well as the larger BLM movement, said, “We’re thrilled to partner with J. Walter Thompson and in particular this effort to uplift and sustain black businesses. Right now, we need to invest in black businesses more than ever.”

The Google Maps-based Backing Black Business effort aims to help users support entrepreneurs in their vicinity while simultaneously highlighting racial disparities in business ownership. Its beta version launched yesterday with over 300 individual businesses represented. “Our hope is to reduce the racial disparity that exists in economic well-being through the promotion of Black business ownership,” Choi said.

The announcement comes at a time when JWT looks to focus on diversity as a way to move the general conversation forward. Much of the news surrounding the agency this year concerned the ongoing discrimination lawsuit filed by global communications chief Erin Johnson against now-former CEO and chairman Gustavo Martinez. Tamara Ingram took over as global CEO after Martinez resigned and immediately promised that “diversity and inclusion will be at the top of my agenda” before laying out her plans for a Diversity and Inclusion Council in May.

JWT and Black Lives Matter plan to work together throughout 2017, and the press release calls it “[a year] about building Black power.” But Choi’s comments seem to suggest the agency sees the potential for a much longer relationship.

Choi said the assignment is different than that of a typical nonprofit “for a number of reasons, but mainly because they are trying something new by working with us, and we have a lot of creative freedom given [their] iterative approach to communications.”

“It’s been challenging and at the same time I think this partnership has been enriching for both teams,” he added.

How nice of them. The only categories are Food & Beverage, Health & Beauty, Entertainment, Lifestyle.

So you can find a Black-owned liquor store or a barbershop, but nothing corporate or business-related. Those categories or possibilities don't even exist in their eyes.

This is a PR bandaid for the Erin Johnson and Gustavo Martinez lawsuit, nothing more.

That has to suck for the black-owned websites like supportblackowned.com or theblackmall.com that have been around and building their community and lists of black-owned businesses a lot longer than white owned, white powered JWT.

JWT is Columbusing all over those black website owners' hardscrabble work is what I'm trying to say.

I want to be happy that JWT is doing something for BLM, but based on the nothing they'be been doing for years this is probably going to be one of those things that's more harmful than helpful, and comes at the hard cost of wiping out the work and livelihoods of a couple of people that have been trying to get projects off the ground forever.