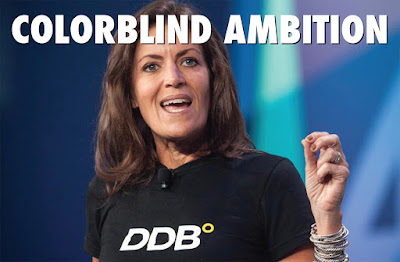 The Digiday Agency Summit in Phoenix included mumbo-jumbo from DDB CEO Wendy Clark, who continued her campaign for diversity. Granted, Clark still emphasized gender equality, meaning her true focus is probably diverted diversity. Whatever. Digiday posted a “live” broadcast from the summit featuring Clark declaring her White advertising agency’s ambition: “It is simply to be as diversely inclusive as the marketplace that we serve on behalf of our clients. Period. That’s our ambition—and we will not rest until we meet that ambition at DDB.” Okey-doke. But Omnicom SVP Chief Diversity Officer Tiffany R. Warren appears to be regularly resting on Sundays. Hey, adland is waiting with bated breath to see how the McAgency of the Future realizes the bold ambition. In the end, Clark’s ambition is not unique. The lack of an action plan, unfortunately, is not unique too.