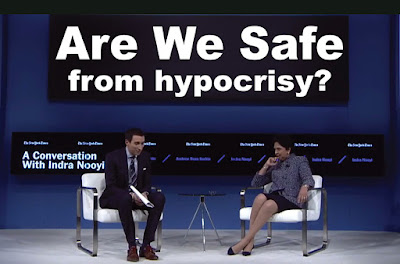 Advertising Age reported on PepsiCo CEO Indra Nooyi’s response to the election victory of Donald Trump. “I had to answer a lot of questions, from my daughters, from my employees—they were all in mourning,” claimed Nooyi. “Our employees are all crying and the question that they are asking, especially those who are not white: ‘Are we safe?’ Women are asking, ‘Are we safe?’ L.G.B.T. people are asking, ‘Are we safe?’ I never thought I’d have had to answer those questions.” Gee, now it’s clear where PepsiCo Global Beverage Group President Brad Jakeman gets his hypocrisy. Like Jakeman, Nooyi is allegedly a staunch defender of inclusion and equality—while partnering with White advertising agencies where discrimination is the norm and diversity is a dream deferred, delegated, diverted and denied. Heaven forbid the exclusive shops might prompt non-White PepsiCo employees and customers to ask Nooyi: “Are we represented?” Nooyi can do little about Donald Trump. But she does little about her White advertising agencies, despite having the power and authority to demand change. Yet no one is asking about that.

PepsiCo CEO on Trump Win: ‘Our Employees Are All Crying’

How is Donald Trump’s election going over at PepsiCo? Not so well, according to CEO Indra Nooyi.

Ms. Nooyi, a self-identified Hillary Clinton supporter, was among the business leaders fielding questions about the election at The New York Times’s DealBook conference last week in Manhattan. The Times today published the interviews. When Andrew Ross Sorkin asked her how she felt the day after the election, Ms. Nooyi replied: “Do you have a box of tissues here?”

But she added that “the first thing that we all have to do is to assure everybody in the United States that they are safe. Nothing has changed because of this election. What we heard was election talk and we will all come together and unify the country.”

Mr. Sorkin reminded Ms. Nooyi that PepsiCo once hired Mr. Trump to promote Diet Pepsi. The future president starred in this 1988 ad promoting the soda along with a Mike Tyson-Michael Spinks boxing match.

In a backhanded compliment, Ms. Nooyi quipped that Mr. Trump and Mr. Tyson were a “good combination.” She also addressed Mr. Trump’s comments on women, including offensive language that was caught on a hot mic during his 2005 “Access Hollywood” appearance. Mr. Trump dismissed it as “locker room talk.”

“How dare we talk about women that way,” Ms. Nooyi said. “I don’t think there is a place for that kind of language in any part of society—not in locker rooms, not in football players’ homes, not in any place. If we don’t nip it in the bud … this is going to be a lethal force that is going to take over society.”

Some analysts have speculated that Ms. Nooyi might have a political future. She downplayed those ambitions on a July earnings call, saying “in the foreseeable future, so next several years, I see myself running PepsiCo.”

During the Times interview, she was quizzed on Mr. Trump’s protectionist trade views. She downplayed the potential impact on PepsiCo, saying that the company is “local in every country and does very little cross-border movement.” But she added that “there might be discrimination against American companies overseas if there is protectionism in the Unites States.”

Ms. Nooyi also addressed the recent passage of new soda taxes. Measures have been adopted in Chicago’s Cook County, the California cities of San Francisco, Oakland and Albany, and in Boulder, Colo.

“Soda taxes are there to balance budgets. It’s got nothing to do with public health issues,” she said. But she also confronted the much-publicized criticism of sugary soda from health advocates. “Overnight you can’t take away the sugar because the consumer says—‘I love the sugar.’ “

So “what we have been doing is stepping the consumer down,” she added, alluding to PepsiCo’s moves to gradually reduce calories in its drinks. “We have to get you used to the new taste … We have to retrain your palate because for years your genetic makeup loved sugar. So we are retraining consumers around the world to step down their levels of sugar.”

PepsiCo is the worst with diversity. They've been trading on multicultural pop culture, music and imagery for forever, and giving nothing, nada, zilch back to ethnic agencies.

They are Ground Zero of wanting ethnic dollars, but not wanting to hire any ethnic ad professionals.

So for them to express faux shock at Trump, when they've been acting Trump-like for years, is eye-rolling at best, blind hypocrisy at worst.