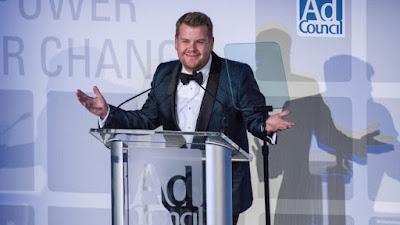 Adweek reported on the recent ridiculous rhetoric from Ad Council CEO Lisa Sherman, who declared, “…[I]n a world that can be dark, it’s up to us to bring the light.” Thank goodness the hypocritical Love Has No Labels campaign is here to lighten the darkness. In a world where there are dark-skinned people, Ad Council continues to employ the Whites—right down to hiring James Corden to emcee its annual public-service dinner. Why the organization might bemoan the election of Donald Trump is bewildering. The President-Elect seems to perfectly reflect the exclusivity and cultural cluelessness of the organization.

‘It’s up to us to bring the light,’ says CEO

While its work includes a number of campaigns in support of left-leaning causes, the Ad Council is officially an apolitical organization. Still, the results of last week’s presidential election, and the months of rancor preceding it, hung heavy over the group’s annual public-service dinner in New York on Wednesday—with plenty of gallows humor from the host, James Corden, and words of encouragement and solace from Ad Council CEO Lisa Sherman.

In her speech to the agency and media partners assembled at the Waldorf Astoria hotel, Sherman, two years into her CEO role after succeeding Peggy Conlon, used a metaphor about superheroes to urge them to continue the good fight for social change.

“You know what the best part is? Your superpowers are real. And believe me when I say, they have never been more essential,” she said. “How many of you have looked at the division and derision in our country, the desperation and conflict overseas, the chasms in our own communities? Or struggled with some fear, stress or heartache in recent weeks and felt helpless? Just wanted to give up? But in a world that can be dark, it’s up to us to bring the light.”

She added: “There are few groups of people more capable of creating a better world—a more united, a more prosperous, more safe, more educated world—than those in this room. We have the talent. We certainly have the ability. And most of all, we have the heart. And if we don’t help those around us come together in service of the common good, who will?”

Corden opened the evening with an amusing speech that included plenty of jokes about the election. “If you voted for Donald Trump, put your hand up. Go on, do it,” he dared the guests. When not a single hand was raised, he crowed: “You fucking liars. One of you did. One of you did!”

He also needled Facebook, one of the night’s platinum sponsors.

“Where are my Facebook people? Where are they?” he said, scanning the room. As the Facebook attendees began to cheer at their table, Corden made a not-so-veiled reference to the fake political news that spread on the site in recent months.

“Hey, Facebook. Great job on the election, guys. Seriously, bang-up job,” he said with a sarcastic thumbs-up, before adding: “You can tell it’s Facebook because it’s filled with all your current friends, and that one guy from high school who’s now a Trump supporter.”

Corden also made a few cracks at ad people generally.

“This is the night you set aside to feel better about yourselves after spending 364 days of the year figuring out how to trick people into eating at Jack in the Box,” he said at one point. “It’s nice to have the Jack in the Box people here tonight. What you have in front of you—that’s food.”

The Ad Council honors a corporate executive at its dinner each year. This year it was Shantanu Narayen, president and CEO of Adobe, recognized for his philanthropic work and public service contributions through the Adobe Foundation—including a special focus on fostering creativity in youth.

Other attendees included Lizzie Velasquez, an anti-bullying activist who stars in the Ad Council’s “I Am a Witness” bullying prevention campaign; the Henderson-Strong family, who were in the Emmy-winning “Love Has No Labels” PSA; and Jocelyn Esparza from the High School Equivalency campaign.

Sheryl Crow performed a set of songs at the end of the dinner, which was themed #APowerForChange and ended up raising $4.5 million to support the Ad Council and its 40 national public service campaigns.

The dinner was chaired by Margo Georgiadis, president of the Americas at Google and chair of the Ad Council’s Board of Directors. Platinum sponsors included Adobe, Facebook, Google, iHeartMedia Inc. and Clear Channel Outdoor.

Ad Council can pat themselves on the back all they want for their open-mindedness and dedication to diversity, but their track record proves otherwise.

Look at what they've done for the last decade or so.

High-end campaigns, the ones that win at Cannes and get their creators more work and stellar job opportunities and accolades, go to white agencies and vendors that are always white or European. They enjoy big budgets, big bells and whistles, and deep pockets full of help.

Low-end campaigns, that are barely a step up from local used car advertising, go to ethnic agencies and vendors. They lean on them to put in money themselves, skimp on creativity and development and quality, and treat the end product and the people that made them like cast offs.

Ad Council perpetuates the Catch 22 in advertising where you can't get a quality gig unless you have high quality work, by making sure only an elite and mostly white circle ever gets the quality Ad Council campaigns. To add insult to injury, they happily pick up their ADCOLOR Awards for how diverse they are, and continue on their merry way year after year.