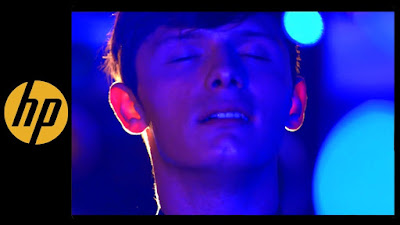 Campaign reported HP produced a holiday video featuring a deaf character that is being criticized as patronizing and clueless. Gee, HP Chief Marketing and Communications Officer Antonio Lucio will have to ask his White advertising agencies to add a section to their diversity action plans to include disabled people.

The ad strikes a pitying tone, garbles sign language and has no subtitles, note critics.

The HP film stars two brothers. One is a musician, and the other is deaf. The deaf brother can’t fully participate in his brother’s pastime, so he looks solemnly in the mirror, sulks in the bathtub and angrily plays air guitar in his bedroom. However, the guitarist brother has an HP Spectre x360 laptop, which allows him to transform their basement into a sensory overload experience. Primary-colored light bulbs shine brightly with each stroke of his guitar, giving the deaf brother the chance to “hear” the music, and he cracks a smile for the first time in the nearly three-minute commercial.

The spot, which began airing in 60-, 30- and 15-second versions in the UK and the US last week, is notable for furthering a trend among brands of featuring disabled people in advertising. A young woman with cerebral palsy jokes about her condition’s effect on her sex life in Mars’ UK Maltesers ads from AMV BBDO, and a wheelchair basketball team enjoys pints of Guinness after a game in a US ad for the beer from BBDO, New York. And Microsoft and Spotify have recently featured deaf people in their ads to emotionally demonstrate the power of their product.

But unlike those ads, which have been generally greeted with approval from disability groups, the HP commercial is rubbing some Deaf advocates the wrong way, both for the tone of its content and some glaring technical oversights.

“It’s this narrative of ‘I feel sorry for myself, I can’t hear,’ which is B.S.,” said Tari Hartman Squire, founder and CEO of disability-inclusive, strategic marketing firm EIN SOF Communications. “I believe this ad is out of touch and did not engage the Deaf community in its creation.”

Josh Loebner, director of strategy for Knoxville-based advertising agency Designsensory and owner of the Advertising and Disability blog, agrees: “I’m quite disappointed. They’re continuing to portray the stigma that because that person is disabled, there’s a pity that’s associated with disability, and I would argue that’s just not the case. Creatively, they could’ve gone beyond what they did.”

Worse, the ad slighted the very community it’s supposedly embracing by overlooking some basic factors, said the critics. “There are no captions, and the frame cuts off the signing between the two brothers,” making it impossible for Deaf people to follow the conversation, said Squire. “It’s sloppy at best, destructive at worst.”

But HP and AMV BBDO, the company’s AOR for its personal computer business, said they consulted the deaf community. Deaf actor Joshua Castille plays the main character, and the UK’s Action on Hearing Loss (formerly Royal National Institute of the Deaf) advised on the script. Signing experts taught the actor who plays the musician brother to sign, so he could create an authentic bond with Castille on set.

“Josh can’t take verbal direction, so everything had to be signed to him,” said Tom Suiter, HP Corporate Communications. “It’s a testament to his acting talent that he could take that direction so well and give as powerful a performance as he did.”

Abigail Brown, an account executive on Mars at AMV BBDO, London, expressed her appreciation of the film on Twitter last week. Although she did not work on the agency’s HP spot, she tweeted that it “brings back so many memories of being that deaf kid, trying to get what music sounds like.” Born with a genetic bone condition called osteogenesis imperfecta, Brown began losing her hearing at 8 years old and experienced severe hearing loss by the time she was 14, exactly the same time her friends started really getting into band culture.

“I remember being at a gig in Union Chapel in London and just crying because all my friends were clearly loving the music, and all I could hear was feedback from my hearing aids reacting with the sound system,” Brown said. “My favorite thing to do in a club was to turn my hearing aids off, stand next to the speakers and feel the vibrations. ‘Brothers’ is just a more dramatic, more compelling version of that experience; it demonstrates that aural sound is not the only way we can enjoy music.” 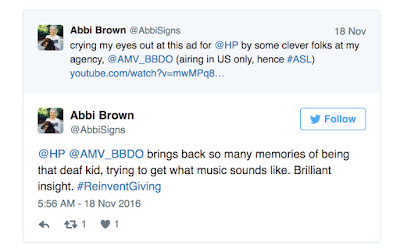 Still, Squire believes the ad is a “huge swing and a miss” from HP, one of the first companies, along with Apple and IBM, to have an accessible technology division.

That BBDO is the agency behind the offending spot surprised Squire, who considers it to be one of the most “disability-savvy” agencies. She also thinks one of the agency’s other commercials—“Learning Sign Language,” which BBDO NY made for Wells Fargo—is a model for Deaf inclusivity. That spot employed wider camera angles to allow viewers to see the signing and included captions.

Michael Kaufer, actor and director of Deaf Film Camp, agrees it’s difficult to see the sign language in the HP spot (though he was able to catch a little bit through lip-reading, he said). But he still gave the brand credit for trying. “On the positive end, it is good to have a deaf actor. If you asked me to do that role, I would do it, but I wouldn’t be comfortable,” he said, comparing it to an AA member having a shot of whiskey in an ad. Sure, feelings of self-pity occur from time to time, but it’s not the image he wants to portray.

Loebner also takes issue with the isolationism. Other than a neighborhood jog to air out his frustrations and being silently annoyed at his brother’s concert, Castille’s character is portrayed as living in a lonely, isolated world. “And it’s not just his house, it’s in the young man’s basement,” he said. “That’s what we think of. If somebody has a disability, they’re probably just in a basement. Clearly, that is not the case!”

In one scene, the deaf character is frustrated at his inability to enjoy his brother’s performance. But that, too, is out of touch with reality, said the advocates, because there’s a growing industry of interpreters at rock concerts. Kendrick Lamar and Iggy Azalea have made headlines for hiring interpreters at Lollapalooza and Austin City Limits music festivals. Metallica, the Weeknd, Tove Lo and Charli XCX have also followed suit. In March, 7UP created a “Concert for the Deaf” with EDM superstar Martin Garrix.

Loebner questions why HP and AMV BBDO opted to strike such a powerless tone: “HP really missed the mark and could’ve done a substantially better job to say, ‘You know what? We don’t want to share a story that isolates this individual that has a disability, but rather, simply, we want to show how that person can engage with a larger narrative where the person with a disability is amongst others with varying abilities at this concert.’”

HP learned from the best, didn't they?

Their ad agencies, hell all ad agencies, taught them that they easiest way to "Support Diversity" is to throw a few seemingly diverse actors/talent in front of the camera and call it a day. Yay, diversity! Go collect your ADCOLOR Award!

Now HP is learning the hard way that having at least a modicum of insight and someone from those communities they're exploiting BEHIND the camera, in decision-making roles, would have saved them from the loss of brand equity and reputation.

Better luck next time, I guess. They'll still probably get an ADCOLOR nomination for this campaign.