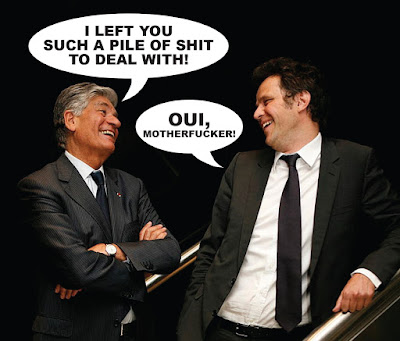 Adweek reported Publicis Groupe officially announced it will swap an old White Frenchman—Maurice Lévy—with a younger White Frenchman— Arthur Sadoun—in the role of Chairman and CEO. Vivé la Divérsity! Does this mean Lévy’s office will no longer be available via Airbnb?

After 30 years, a changing of the guard

Publicis Groupe announced today that Arthur Sadoun will become the holding company’s next chairman and CEO, effective June 1. Sadoun will take over the role from Maurice Lévy.

Lévy, 74, has been with the holding company since 1971 and took on the role of chairman and CEO in 1987. Under Lévy’s management Publicis Groupe made a number of big moves in the industry including the $3.7 billion acquisition of SapientNitro and a massive restructuring of the holding company announced in December 2015. He also attempted to engineer a merger with Omnicom Group, but that fell through.

According to a press release, Lévy made the selection of Sadoun, 44, along with the network’s nominating committee and Elisabeth Badinter, the chairman of the supervisory board and president of the nominating committee. The committee began its process to find a successor for Lévy in November.

“First of all, I’d like to congratulate Arthur,” Lévy said in a statement. “I am extremely happy with this choice, which is the most appropriate and judicious for the future of our Groupe, and congratulate Arthur warmly … I have known Arthur for many years. We have worked very closely together. He is a seasoned professional with an inspiring vision of our industry and of our clients’ needs. He knows them well, he understands them well, and he knows how to deliver the solutions and services they need to grow, develop and transform by selecting the best talent. He has the intelligence, the energy and the passion necessary to master our trade in a connected world that is changing and evolving constantly.”

Sadoun has long been considered a potential candidate to take over Lévy’s role, but became a clearer choice in recent months following the restructuring of Publicis Groupe in December 2015. At the time, Sadoun was named CEO of Publicis Communications which is comprised of the network’s creative agencies including Saatchi & Saatchi, Leo Burnett and BBH.

“Leading the company founded by visionary Marcel Bleustein-Blanchet and made into a global communications leader by Maurice Lévy is an immense honor and an incredible challenge,” Sadoun said in a statement. “A challenge that I’ll meet with open arms, thanks to the continued contribution of Maurice’s wisdom and experience, and the support of Steve King, the Management Board and the talented individuals who make up Publicis Groupe.”

Sadoun made a relatively quick rise to the top at Publicis Groupe, kicking off his career there in 2006 as CEO of Publicis Conseil. He was named global CEO of Publicis Worldwide in 2013 and added a leadership position at MSL Group to his responsibilities in 2015.

Along with the news of a successor for Lévy, Publicis Groupe also announced that Steve King will join the network’s management board. King currently serves at CEO of Publicis Media.

This is the most stubborn holdout holding company, right?

The one that most dug in its heels and said "We don't have to release any ethnic diversity stats, it's against French law."

But wants all the benefits of doing business in America at the same time.

The hypocrisy is astounding. Release the EEO-1 data in the USA, and stop shoving H1B visa holders in everyone's faces as proof of diversity in the meantime (and in the EEO-1 counts, if you ever get around to being respectful enough of American business requirements in the first place).