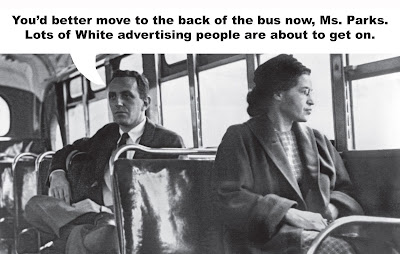 Advertising Age reported White advertising agencies are not only jumping on the White women bandwagon, they’re busing staffers to the women’s rights march in Washington, D.C. Why, WPP’s JWT New York is shuttling around 50 employees to the event—although it’s a safe bet Erin Johnson isn’t getting a free ride. And once again, minorities and true diversity are pushed to the back of the bus.

A number of advertising agencies are supporting and organizing efforts around the global marches for women’s rights on Saturday, including several that are paying for transportation down to Washington, D.C.

The grassroots event, which started as the Women’s March on Washington, has vastly expanded, with more than 600 marches expected to take place worldwide one day after Donald Trump’s inauguration as president of the United States, according to the Women’s March website. Marches are scheduled in cities across all 50 states and dozens of countries including Mexico, Canada, India, Iraq, Spain, Japan and the U.K.

Interpublic Group shop Huge is busing 50 staffers, men and women, to D.C. from New York on Friday ahead of the march, while also covering expenses for meals, Metro transportation and poster-making materials. Most of the team plans to sleep at Huge’s D.C. office, but a few will bunk with colleagues in the city.

As soon as Huge saw interest among staffers in New York to go to D.C. for the march, CMO Patricia Korth-McDonnell said the shop started thinking of ways to support them. When the numbers continued to swell, Huge decided to cover all transportation, food and lodging at the office, especially because Airbnb prices have been surging and all hotels are sold out.

“We definitely support people getting engaged in the community and we are an organization that celebrates activism and we are also really proud of the diversity of our team and of our gender mix across the board, including technology, design and leadership,” she added.

Similarly, WPP’s JWT New York is busing about 50 employees, nearly half of them men, to D.C. on Friday evening. The staffers plan to wear specially created matching T-shirts that say, “Keep It Coming #ShatterSomeGlass.” (All T-shirts were printed in extra-large sizes so the team can wear them over their coats in January D.C. weather.)

Leslie Ali, executive creative director at JWT, has been organizing the agency’s marching efforts “out of personal passion, as well as from just knowing from colleagues that there’s so many things people want to express and going to the march feels like doing something.”

“The agency just wants to see us go down there and support the things we love,” she added.

Among other agencies also participating, Publicis New York CEO Carla Serrano is taking two buses of employees to the march on Saturday. Badger & Winters is organizing march groups Saturday in New York and Washington under the banner of its #womennotobjects campaign. And Work & Co is sending two buses to D.C. from New York.

New York City-based Chandelier Creative is sending four employees from different departments—writing, social media, film and design—to participate in the D.C. march and represent the agency’s values. The team also plans to talk with people from all over the country during the march and share their stories and concerns.

Laundry Service has a number of people going to marches in various cities and is allowing them to take over the agency’s social channels throughout the event, said Jason Stein, CEO and founder of the agency. The shop is also posting in social media a video about empowering women that it created and it’s handing out “Future Is Female” T-shirts to staff, clients and friends, as it did on Women’s Equality Day last August.

“Our support is not a statement about our political beliefs,” Mr. Stein said. “It is a reflection of our continued commitment to gender quality, women’s rights and empowerment of female leadership.”

While Iris Worldwide has nothing formally planned around the marches, the agency provided all staffers with information about them and gave them the option to take off on Friday afternoon to travel to D.C.

Marie Davidheiser, the agency’s New York managing director, also sent a note to employees that said: “Participating in politics is our civic duty; it’s one of the ways we can continue to have a voice, protect our diversity and individual rights.”

A team from TBWA’s Backlash offering, which provides all 12,000 employees with daily cultural news and insights from around the globe via internal videos and Instagram, will attend the march in D.C. to capture footage for its next agency-wide post.

There is a 100% chance that JWT will mention their support of the march in a) their lawsuit with Erin Johnson and b) their holding company's next annual report.

There is also a 100% chance they would never offer the same support for ethnic diversity issues, based on the 100% certainty they've never done it in the past.

Some (white) people get chartered buses, everyone else (ethnic) gets meaningless diversity statements on websites, brown bag diversity lunches during Black History Month, and go-nowhere support that adds up to a few hundred dollars a year max.

Where were any of these agencies and holding companies during the Black Lives Matter marches? Ferguson?

Hell, where were they over the last few decades, besides alternately complaining that minorities just don't want to work in advertising, and that the ones that do aren't getting hired because it's "all about the work", or "it's just a cultural fit thing"?