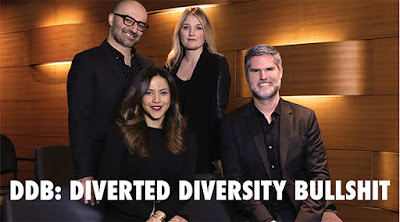 The New York offices of DDB announced a series of four promotions and new hires today.

“It’s an exciting time for us,” said DDB New York president and CEO Chris Brown. “We had a successful 2016 with revenue and profit growth and we are very focused on maintaining this momentum in 2017. These promotions and hires are part of this and reinforce our commitment to ensuring we attract and retain the very best talent.”

Martinez joined DDB more than two and a half years ago after serving in account director roles at the New York offices of BBDO, Havas and Ogilvy & Mather. Brown noted that she had been running “big integrated pieces of business for us” including portions of the New York Lottery and State Farm accounts. In the new role, she will also be responsible for new business development and strategic initiatives including the introduction of U.S. clients to DDB Flex, the new model debuted last year by North American CEO Wendy Clark.

“The decision to name a CMO is about recognizing the dynamic, changing times we’re in,” Brown told Adweek. “It’s really important to be very clear about what you do and how you do. [Martinez] will work with leadership to provide a strategic perspective for how the agency markets itself.”

Bernhardt previously worked in the publishing world as executive director of communications at Glamour magazine. She previously served as evp on the Unilever business at Edelman, the world’s largest independent PR firm. “We often talk about brands needing to act like publishers,” Brown said, “So we need people who know how that works: How brands can create experiences that truly deliver on the paid, owned and earned media model as well as creating content and working with influencers.”

Rea comes to DDB from VR-focused production studio Framestore, where he served as head of creative technology and worked on McCann New York’s “Field Trip to Mars” project, which was the single most-awarded campaign at Cannes last year. DDB created his new position to help provide leadership for the technological aspects of all client projects.

Regarding the office’s plans moving forward, Brown said, “I don’t think we’ve ever been busier from a pitch perspective ... there’s always lots of stuff happening, and we’re creatively busy in production on all of our clients, including new campaigns for the Tribeca Film Festival and the Ad Council.”

DDB's argument will be that white men = diversity of thought.

And that VR experience = diversity of experience.

So therefore DDB is the diversity-est of them all.