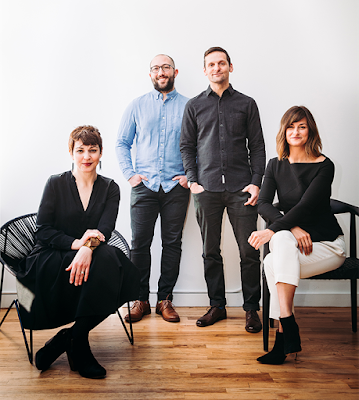 Adweek reported Joan—a White-female-owned advertising agency—hired its first senior creative team. And it turns out the two White women enlisted two White men. Gee, it sure would be bizarro if Joan failed to earn certification from The 3% Conference.

Joan scored one of the 2016’s most prominent boutique-agency launches last May, when former Wieden + Kennedy creative director Jaime Robinson, and Ogilvy and Refinery29 veteran Lisa Clunie joined forces to provide clients with a “more flexible” approach to marketing.

That September, their agency effectively made its public debut with “Rules for the Modern Woman,” a campaign promoting Netflix with female-driven scenes from its many original series.

Now, after naming a string of staffers to fill roles like chief data officer, strategy lead and head of business operations, Joan has snagged the award-winning duo of Dave Canning and Dan Treichel to serve as co-executive creative directors in its newly opened Manhattan office. They are Joan’s first senior creative hires, and both report directly to Robinson.

“There’s something about [Dave and Dan] that I personally fell in love with,” Robinson said. “They’re incredibly kind and funny, and their creativity has a playful edge to it which I absolutely love.”

“We want top-notch creatives,” Robinson said, explaining the Joan approach to hiring, “someone who has a sense of big ideas that cross the boundary between advertising and entertainment and also uses data in fresh, interesting ways … instead of maintaining the status quo.”

Canning in a statement: “We couldn’t be happier to be joining Joan. Jaime and Lisa are two of the smartest and most talented people in this business and we can’t wait to ride their long, illustrious coat tails to many successes.” Treichel adds, “After one Skype with Jaime and Lisa we looked at each other and said, ‘We really, really hope we get this job.’”

The duo helped lead 180 Amsterdam’s work for Asics before meeting with the Joan team in New York. They’ve collectively worked on campaigns ESPN, Southern Comfort, Clash of Clans and PS4 while working for Barton F. Graf, Wieden + Kennedy, Droga5 and other prominent shops.

They are also Joan’s most visible male employees. When the agency came onto the scene last year, many stories focused on the fact that it belonged to the still-rare breed of shops founded and led by women. But Robinson framed the group’s mission more broadly.

“Diversity is part of what we stand for, and it’s core to our foundation and our beliefs,” she said. “What we’re really looking for are unusual thinkers and creators, interesting combinations of people from diverse ethnic, gender and career backgrounds … who will make the magic that we want.”

Most of Joan’s clients, like General Mills and Adidas, are general-market brands that don’t specifically target female consumers. Robinson also mentioned several new business wins she can’t yet reveal and said Joan is looking to continue growing at “what I would call a phenomenal pace” in 2017 by expanding its existing relationships and aggressively pitching when the opportunity feels right.

The agency opened the office in December and plans to continue complementing core staff with a rotating cast of project-based freelancers as its full-time team grows.

“We are building a culture here from a crew of like-minded individuals,” Robinson said. “Our job is to make amazing work.”

The one consistent pattern I've seen over my career, across different agencies, is that as soon as a white woman (or in Joan's case, multiple white women) climb on the diversity bandwagon and get a soapbox for themselves, they turn around and hire...

Then they dedicate a few spare hours to coaching or mentoring black and brown teenagers, and hire...

Then way down the road, and always in back office positions, they hire one or two women of color.

That leaves men of color shut out entirely, back of the line.

I'm trying to think of any instances of white women, once they got an industry job because someone else beat the diversity drum, reached out and helped an American minority of color.

I'll I got is nothing.

It's like their default is "hire white men first to prove we're all equal," followed by "mentor black girls in a middle school somewhere" and then "write a meaningless editorial about how diversity of all vague kinds is equally important".