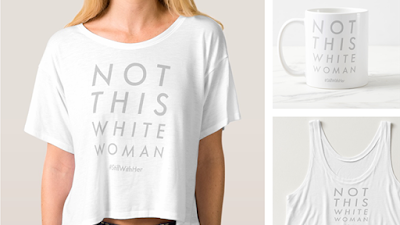 “Normally, of course, we’d want to be inclusive of all races in any product that we make, but because these aren’t normal times—because right now racism and white supremacy are on the rise—and because white women played a key role in this election, speaking out as a white woman specifically here feels necessary,” explained the co-creators (Freelance Copywriter Michelle Hirschberg and Droga5 Group Creative Director Karen Land Short). Actually, for the advertising industry, these are very normal times, as racism and White supremacy are an established part of the norm. Land Short need only scan her own agency’s hallways to confirm the truth. Additionally, diverted diversity makes speaking out as a White woman quite common.

Unique? Not these White women.

Why 2 Agency Creatives Launched ‘Not This White Woman,’ an Anti-Trump Clothing Line

If you were disappointed with how certain demographics voted in the 2016 presidential election, you’re not alone.

Freelance copywriter Michelle Hirschberg and Droga5 group creative director Karen Land Short found a way to channel their frustrations with fellow white female voters, who supported President-elect Donald Trump over Hillary Clinton by a 53-43 margin last November and contributed to his surprise victory. The duo made clear that they were decidedly not part of that group with the launch of Not This White Woman, a clothing and merchandise line featuring the slogan. Smaller font below reads, “#StillWithHer.”

“Normally, of course, we’d want to be inclusive of all races in any product that we make, but because these aren’t normal times—because right now racism and white supremacy are on the rise—and because white women played a key role in this election, speaking out as a white woman specifically here feels necessary,” said Hirschberg and Land Short.

All profits from the sale of Not This White Woman merchandise will be donated to Planned Parenthood, which has seen a spike in fundraising since election night. In addition to various t-shirts, Not This White Woman also sells sweaters, buttons and mugs. So far the “boyfriend tee” has been their best seller.

Hirschberg and Short considered other nonprofits such as the ACLU and Southern Poverty Law Center, but ultimately decided on Planned Parenthood because they guessed that the incoming Congress would attempt to defund the organization. Last week, House Speaker Paul Ryan promised to introduce related legislation as part of an effort to repeal the Affordable Care Act, better known as Obamacare.

“A t-shirt is, of course, a drop in the bucket in the grand scheme of things,” Hirschberg and Land Short tell Adweek, “so we’re also staying vigilant and active in dozens of other ways. We hope others are too.”

The project’s genesis can be traced back to Hirschberg writing the phrase on a sticky note she left on the Subway Therapy Wall in Union Square Station in Manhattan. After commiserating about the outcome of the election, the two creatives decided to create a t-shirt featuring the phrase.

Hirschberg and Short explained, “Obviously this election was different from the others. It went so far beyond policy. Trump labeled people. Mexicans were rapists. Muslims were terrorists. Women were objects.”

“After the stat came out that 53 percent of white women voted for Trump, it seemed like there was one more label. White women were Trump voters. We were part of the problem. We were okay with racism. Okay with sexism,” they added. “Whether those white women voted in spite of Trump’s divisive rhetoric or not, it felt important to stand up for inclusiveness in any way we could. And we will continue to find ways to do that.”

In speaking to others who remain wary about the Trump administration, they said, “If we have any advice for those also struggling, it’s to keep moving. Keep trying things. And to breathe.”

Know what leaves a bad taste in my mouth?

The number of times Droga5 has gobbled up Total Market work right out of the hands of minority ad agencies, teams and even vendors.

They aren't content with letting minorities have even the tiniest crumb.

They are Ground Zero for agencies that claim to be multicultural experts which, when push comes to shove, boils down to them adding one minority copywriter or junior AD, casting a bunch of mixed-race talent in front of the camera, and utterly locking out anyone who's not an existing white friend (or creative, or company) who has already worked with their agency.

The worst part is the nice white ladies doing their best to show how diverse they are, and sell these mugs and shirts, never even stop to think about that when they're working with Droga5. They're too busy coming up with trinkets to support diversity, and pat themselves on their backs for diversity, to ask "Why are there never black or brown American faces invited to participate in anything at all at Droga5?" "Why are the only people of color surrounding our agency all from overseas and on H1B visas?" "Why do we as an agency insist on public displays of 'proof of diversity" but never do anything behind the scenes to help quietly?"

Tip, ladies? Stop designing mugs and start designing a way to get more of those people to the table.