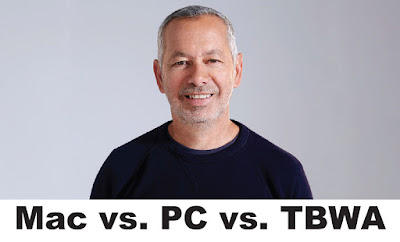 Adweek published a lengthy story detailing—in painful detail—the age-discrimination lawsuit filed against TBWA by former Global Chief Creative President Duncan Milner. The 30-year veteran worked on lots of iconic campaigns for Apple before allegedly getting sacked like a rotten apple. Not sure why Adweek is serving as a soapbox for White people claiming to have been wronged by White advertising agencies. Somebody should tell Milner it’s time to “Think Different”—or at least find a different job. If he’s hoping to score big bucks, well, “Here’s to the crazy ones…”

Duncan Milner claims he was a victim of age discrimination

Duncan Milner, the TBWA creative executive who was handpicked by Lee Clow to lead some of Apple’s most iconic ad campaigns, has been terminated from the agency after more than 30 years. And Milner has responded by filing a wrongful-termination suit against his longtime agency.

When TBWA\Media Arts Lab was founded as a bespoke agency for the Apple account in 2000, Milner was the creative lead, rising to CCO in 2009. But in 2016, Milner was replaced by current CCO Brent Anderson and moved into a vaguely defined position as global chief creative president focused on MAL\For Good, the purpose-driven arm of the agency.

This year, after Clow announced his retirement in February, Milner was informed the agency “couldn’t carry his salary anymore,” according to his lawsuit, and in June, he was terminated.

“I felt I was let go unfairly, and we couldn’t come to an agreement over what I felt was fair compensation, so I have filed a suit,” Milner told Adweek, saying he was told the agency “didn’t have a job for me” and “couldn’t cover my salary.”

TBWA Worldwide is aware of Milner’s lawsuit but declined to comment to Adweek, citing a policy against discussing pending litigation. However, the agency did acknowledge in a statement to Adweek that Milner’s position was cut when MAL\For Good was folded into another arm of the agency network.

MAL\For Good “struggled to be profitable as a stand-alone business entity,” TBWA Worldwide said in a statement. “Earlier this year, the decision was made to evolve MFG into a strategic, consultative offer within TBWA\Chiat\Day L.A. As a result, Duncan Milner’s position as the creative leader of MAL\For Good was eliminated.”

According to Milner’s complaint (which you can read in its entirety below), which he filed with the California Superior Court in Los Angeles, he is suing TBWA for alleged age discrimination and breach of oral and implied contracts. The suit also points to the alleged erosion of Milner’s compensation and influence in recent years, culminating in his replacement by Anderson as CCO of TBWA\Media Arts Lab, which the lawsuit describes as a “demotion” and an “unceremonious shift.”

Milner’s lawsuit says he was presented with two options: take a 50% pay cut and take on three additional accounts or accept a severance package and leave the company. In June, the suit alleges, Milner was called into a meeting with chief talent officer Kristen Clark and TBWA\Chiat Day L.A. managing director Michael Claypool and informed that “they had looked around” and “didn’t have anything for him, even at a reduced salary.”

At one point, according to the suit, Milner told Clark, “It’s starting to look and smell like age discrimination.”

In his 31 years at TBWA, Milner was part of building Apple’s prodigious and wildly successful marketing campaigns, including the lauded “Mac vs. PC,” the iconic “Silhouette” work that made the iPod one of the most popular electronic devices of its day and the ongoing “Shot on iPhone” campaign.

The lawsuit describes Milner as working closely with Apple founder Steve Jobs and often being praised for his work.

“Following the launch of the iPod in 2001, Jobs commended Milner and his team, exclaiming, ‘You guys gave me a billion-dollar idea!’” the lawsuit states. “For years thereafter, Milner received high praise from Jobs for his iconic ‘Mac vs. PC’ campaign, which was named ‘Campaign of the Decade’ by Adweek. Jobs would say to Milner, ‘You guys are the best in the business, and that’s why you’re here.’”

The suit states that Jobs continued to include Milner in his inner circle of marketing even as his health deteriorated.

“After Jobs’s health declined, Milner continued to meet with him until a week or two prior to his death,” the lawsuit states. “As his health worsened, Jobs became more selective about those he would allow to bring work to him at home, but Milner was always included in the select few who went to Jobs’s home to meet with him.”

In addition to his time in Los Angeles, Milner worked across the agency network’s offices in St. Louis, Toronto and San Francisco, where he worked on Levi’s in the late 1990s.

But his fortunes at the agency changed after the arrival of Ruhanen in 2014, according to the lawsuit. A year later, Milner emailed Ruhanen to complain about his annual bonus being surprisingly small.

“I received my yearly performance bonus a few days ago…suffice it to say, I’m beyond disappointed,” Milner wrote in the email, as quoted in the suit. “It’s hard not to look at this as at worst as an insult and at best a criticism of my performance. I had hoped that after 14+ years of working on and building Apple, and 7+ years of building MAL offices doing the majority of Apple’s 2 billion dollars of marketing … To see my base salary stay stagnant for 3 years, my bonus shrink year after year, and no new stock grants since 2012 leads me to believe that TBWA and [parent company] Omnicom don’t hold my contribution or value in very high regard.”

About a year after that conversation, while waiting to board a 2016 flight to Prague for an Apple commercial shoot, Milner said he was told he was being moved out of the CCO position at TBWA\Media Arts Lab and taken off the Apple account, with no clear plan for his next role, according to the lawsuit.

In 2017, his annual compensation at MAL\For Good “was reduced drastically, by half, the result of having his bonuses removed and Omnicom’s issuance of stock grants discontinued,” the lawsuit states. He was then informed this year that the position would be eliminated.

“I’m shocked [by the dismissal],” Milner said. “I’m proud of the work we were doing and the work I did while I was there.”

Seems like there's more and more cases of white guys getting more than their bite of an apple through the years, sharing their apple with a small circle of white friends (again, for years), and then complaining only NOW about the lack of diversity.

The proof of whether someone is serious about diversity and fairness would be in the legions of POC they helped into position along the way, and whose careers they fostered, if that happened at all.