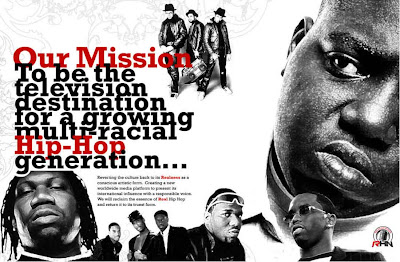 Adweek reported Real Hip-Hop Network chose Berlin Cameron United as its AOR. Granted, the client is not worth a lot of revenue, but one has to wonder if the review included obvious candidates like Translation, Amusement Park Entertainment, will.i.am, Latinworks or any number of Black agencies. Damn, the minority shops can’t even pitch for hip-hop accounts.

Berlin Cameron United’s grasp of youth culture—as illustrated in past work for Boost Mobile and VitaminWater—made Atonn Muhammad confident that the shop could tackle advertising for his Real Hip-Hop Network.

To date, the four-year-old network has lived online. Next month, however, RHN will extend its reach through satellite TV providers DirecTV and Dish. Those expansion plans sparked Muhammad’s search for an ad agency that led to the hiring of Berlin Cameron.

Media spending behind the creative assignment is projected at $15 million. The New York agency’s work will take the form of TV, print, outdoor, radio, and online ads. RHN’s programming represents a mixture of news, documentaries, concerts, videos, and perspective, including a show hosted by rapper KRS-One that's called “Analyze This." Its core target is the 18- to 34-year-old demographic.

Berlin Cameron’s ads will aim to appeal to viewers as well as advertisers and regional cable operators. The shop’s first campaign will likely break in December, according to CEO Ewen Cameron.
Posted by HighJive at 8:56 PM

Does even make sense to exist as a black agency?
You cant even pitch for AOR for a hiphop oriented account. Damn. Their existence is becoming meaningless as time passes by. Basically its saying u cant even run your own shit so we might as well give it to the white boys.