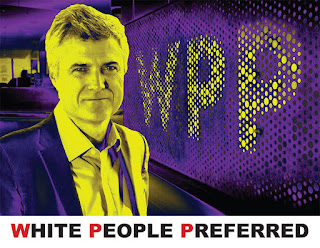 Advertising Age reported on the latest memo—this one from WPP CEO Mark Read—revealing a White holding company’s dismal diversity data. For example, “2.2 percent of WPP’s U.S. senior and executive-level managers” are Black. This should silence the whining of idiots like Kat Gordon who hold up the false figure of 3 percent to protest the oh-so-terrible plight of White women.

Read reiterated the Caucasian cliché, “Despite the data’s limitations, the story it tells is clear enough: we have a huge amount of work to do…” Why do White leaders always get a free pass, constantly confessing there is “a huge amount of work to do” for consecutive decades? If any WPP employee toiled on a task for decades and only managed a 2.2 percent success rate—which, incidentally, is roughly less than 2.2 percent better than someone doing nothing to address a challenge—wouldn’t that be grounds for immediate termination?

Of course, Read is taking pseudo bold action in stereotypical style. That is, WPP is delegating diversity to a colored committee. Plus, there will be plenty of tax-deductible donations to organizations labeled as diverse (e.g., enterprises owned by White women). Keep in mind, WPP once boasted its staffers “represent perhaps the most diverse example of diversity of any single organisation.” Okay, but the competition is pretty fucking weak in this Anglo arena.

WPP CEO Mark Read released the holding company’s U.S. staff diversity makeup data in an email to employees on Thursday and announced the appointment of an inclusion council and taskforce “to give particular focus to the challenges facing our Black colleagues and communities in North America.”

This comes as an update to the holding company’s previous commitment to taking “decisive action on each of the 12 points in the ‘Call for Change’” open letter from 600 & Rising. Announced on Juneteenth, WPP also said at the time it would be investing $30 million over the next three years to fund inclusion programs within the holding company and support external organizations fighting racism.

Read said in his Thursday memo that, “in the past, there has not been a single, consistent approach to the collection of this [diversity] data across our different agencies and markets, nor has it been independently audited—which typically we require of all data we report as a public company. We are working urgently on a more robust, centralized system of gathering and reporting ethnicity data (in those markets where we are allowed to collect it), which we will publish annually in our Sustainability Report,” he said.

“However, in the interests of transparency and timeliness,” Read said WPP is sharing “the information we do have for the U.S. now.”

Read said in the email that those figures pertain to WPP’s “most recent submission to the Equal Employment Opportunity Commission,” which was in 2018. He said that is because the EEOC “suspended the collection of 2019 data due to COVID-19, and it predates the sale of Kantar and much of the restructuring that has happened within the business in the last two years.”

“Despite the data’s limitations, the story it tells is clear enough: we have a huge amount of work to do to,” Read wrote. “We are starting to make progress on the actions advocated by 600 & Rising, alongside our wider commitments.”

He said, per the email, among the recent actions WPP has taken to tackle systemic racism are: “Reached out to a more diverse range of educational institutions and candidates who may not have taken a traditional route to our industry”; “Rolled out new mandatory anti-racism and inclusion training for all our HR people and leaders”; and “Engaged with our biggest clients to drive change together.”

“Various other workstreams are underway to ensure we address all of our commitments, and we will continue to update you on their progress,” Read said, adding a reminder to employees that WPP would be “matching employee donations to charities and nonprofits committed to fighting racism, up to $1,000 per person, to a total of $1 million.”

Read also explained the appointment of WPP’s new taskforce and inclusion council. The taskforce, he said, "includes WPP employees of different levels of seniority, based in cities across North America, and will have input from external organizations such as the 3 Percent Movement, the Advertising Club of New York and Fishbowl."

He said the taskforce will “be important partners to the Inclusion Council, which will help us to decide which initiatives to support as part of our financial commitment to fight racism.”

The members of the inclusion council are: