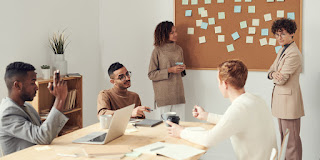 Adweek reported on the latest ANA PR BS involving compiling a list of minority suppliers in the hopes of boosting diversity initiatives with advertisers. Keep in mind, an ANA study unveiled earlier this year indicated companies would decrease engagement with diverse suppliers as a result of the COVID-19 crisis. Additionally, the advertiser club has acknowledged for decades that minority vendors are underrepresented and under-utilized. So now there will be an official list of diverse suppliers being dissed, denied and discriminated against daily. Hell, Adweek couldn’t even find an authentic image of industry minorities to illustrate the story, opting for the royalty-free stock photography depicted above.

By the end of 2020, there will be no excuse for not being able to find a multicultural shop

As brands increasingly look for diversity in the teams that create their marketing, the question is often whether the firm itself truly has a diverse makeup—or whether it just hired a few contractors to look more diverse for a project.

The Association of National Advertisers is trying to take some of the mystery out of the equation with a new supplier diversity list launched today. The initial list of over 100 marketing and advertising agencies will continue to grow, as the ANA asks the industry to contribute nominations.

“The ANA is resolute in its belief that supplier diversity offers many benefits to corporations,” said CEO Bob Liodice in a statement. “It provides opportunities for business expansion as new consumer needs emerge based on shifting demographics. Supplier diversity drives competition between existing and potential suppliers while promoting innovation, as diverse vendors can offer new products, services and solutions.”

The diversity-certified list comes out of an ongoing initiative sparked by the ANA’s AIMM (Alliance for Inclusive & Multicultural Marketing) in June. In a letter published by ANA/AIMM that month, dozens of major brands promised to “do better,” acknowledging that only 5% of ad spend targets multicultural segments, and the ANA’s own May report on supplier diversity showed that a majority of brands did not have plans in place to increase diversity in the marketing firms they contract with.

The list has been made available in a downloadable PDF, with 104 firms in a table showing one or more diversity certifications—each linked to proof of certificate. The certification bodies that ANA drew from for the initial list are:

Notably missing from the list are DOBEs (Disability-Owned Business Enterprises), which are currently certified through the organization Disability:IN. But the list is a living document; the ANA encourages submissions through its website.

While this is the ANA’s first attempt at a supplier diversity database, individual industry professionals had already created similar efforts to make finding multicultural agencies easier. Alma Har’el’s 2016 initiative Free the Bid expanded in 2019 with Free the Work, a curated platform for discovery of underrepresented creative and advertising talent.