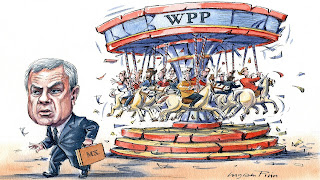 MediaPost published commentary from S4 Capital Honcho Sir Martin Sorrell, who referred to his monstrous creation—WPP—as currently being “a pig’s breakfast” and opined the White holding company should be broken up. Okay, if a WPP drone gets let go, the standard procedure is to sign a separation agreement prohibiting the ex-employee from suing or even criticizing the company. So how come Sorrell—who pocketed a multimillion-dollar exit package—is allowed to openly diss the outhouse he erected?

Martin Sorrell said Friday that his new holding company S4 Capital is closing in on what he termed “double unicorn” status, or a valuation of $2 billion.

Another deal is close to fruition and expected to be announced later this month, Sorrell disclosed at a streaming event hosted by media and marketing consultant ID Comms.

Part of Sorrell’s disruption strategy, he said, was to find merger candidates as opposed to acquisition candidates.

“If you want to sell, we’re not interested,” Sorrell said. “If you want to buy in” and have a “missionary zeal” for the business, that’s what S4 is looking for. Nothing like some skin in the game to keep someone waking up in the morning “with their heart in their mouth” and focused on success, he added.

The company is on the prowl for so-called “whoppers” or clients that account for 5% or more the firm’s total revenue.

According to Scott Spirit, S4’s Chief Growth Officer who also participated in the event, the firm has been invited to more and bigger pitches in the last nine months, including two big pitches going on now. Increasingly, companies triggering bigger pitches want to team up with a single entity, although Sorrell said some of those firms have been willing to let S4 compete for pieces and not the whole scope.

S4 is more interested in pitches led by “change agents,” Sorrell said. Many of its accounts are tied to newer models growing in popularity, including hybrid, embedded and in-house work.

Also, the firm is keen on what Sorrell termed a “land and expand” strategy, in which the firm wins a piece of business from a client and builds on it organically. “The best way to evaluate someone is to work with them,” he said.

Sorrell acknowledged that part of what drives him at 75 to build a big new “disrupter” company is how things turned out two years ago at WPP, where he was CEO for 30-plus years. He insists it was his choice to leave, although others say he was forced out.

The current WPP leadership is “making a pig's breakfast of it,” he said, noting the continuing decline in the holding company’s value. (It’s been dropping for at least five years.) “I chose to resign, and they’re paying a price for it.”

The only solution to the holding-company’s problems, said Sorrell, is to break the company up. He was basically buying market share during his tenure, Sorrell said. That made sense for a time, he added. Now, “it’s gone.”

You have to wonder though if Sorrell would be so quick to dismantle a company he spent three decades building if he were still in charge. My guess is he’d wake up every morning with his heart in his mouth thinking about alternative solutions.