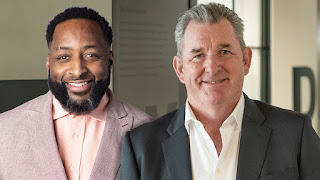 Adweek reported DDB named a new Global CEO and North America CEO, essentially tapping two men—a White man and Black man—to replace one White woman. Neither man is a U.S. native. Technically, the replaced White woman—Wendy Clark—was not a U.S. native too. Regardless, DDB and Omnicom will undoubtedly claim all the hires and promotions demonstrate a commitment to diversity and inclusion, while continuing to hide EEO-1 data. Can’t help but think the DDB moves are more PR than D&I—and ultimately BS.

They take on responsibilities previously held by Wendy Clark

Marty O’Halloran has been promoted to global CEO, a role he takes on after a 15-year run as chairman and CEO of DDB’s Australia and New Zealand offices. Justin Thomas-Copeland has become CEO of the network’s North America region. He previously served as global CEO of OPMG Health, a division of Omnicom Precision Marketing Group.

Both take over responsibilities previously held by Wendy Clark, who left her role as global CEO of DBB in April to lead Dentsu Aegis Network. Clark served as North American CEO of DDB for two years before she was promoted to the global position in 2018.

Chuck Brymer, chairman of DDB, served as interim global CEO following Clark’s departure. In a statement, he said O’Halloran “has a remarkable track record and a relentless focus on adding value.”

Under O’Halloran’s leadership, DDB Sydney took the runner-up spot for Cannes Lions’ 2019 Agency of the Year in the Pacific region. Rankings are calculated based on the number of Lions the agency has won as well as how much of its work made the shortlist. DDB Sydney won three Gold pencils at this year’s One Show for a campaign it worked on for media company Foxtel, which involved creating a graveyard for the many characters who had died on HBO’s Game of Thrones.

“With his guidance and leadership, DDB has become a creative force across Australia and New Zealand,” Brymer said. “Marty knows that creativity is the most powerful force in business, and has a reputation for delivering long-term success for our clients.”

Before becoming global CEO of OPMG Health in 2019, Thomas-Copeland led Rapp New York, a digital marketing agency that’s part of Omnicom. Earlier in his career, he spent a number of years at Wunderman (now Wunderman Thompson) in various leadership roles across Europe.

He joins DDB North America in the aftermath of a number of account losses, specifically at its Chicago office. Over the past few years, the agency has lost lead creative duties for brands including McDonald’s, Capital One and State Farm. However, DDB Chicago won the lucrative U.S. Army account at the end of 2018, and its New York office was named Kroger’s first agency of record last year.

John Wren, Omnicom’s chairman and CEO, said O’Halloran and Thomas-Copeland are “well known within Omnicom as transformative leaders with unique insight into creating successful global brand experiences” in a statement.

“At Omnicom, we place considerable emphasis on succession planning, which is why we continually invest in our talent,” Wren added. “With their leadership and commitment, I am confident that DDB is well-positioned for success.”

During Omnicom’s first quarter earnings call in April, Wren criticized Clark for leaving DDB “in the middle of a crisis,” referring to the coronavirus pandemic.