15090: The Rants Of Sir Martin Sorrell Are Getting Old And Tired. 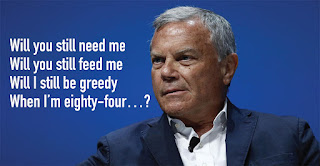 The Guardian spoke with Sir Martin Sorrell, who predicted he won’t retire until age 83 at least. He also seems to believe he’ll be in the business longer than the highlight of his career—WPP—and he continues to opine the White holding company should be dismantled. “I think [advertising holding companies] are past their sell-by date and not fit for purpose any more,” said Sorrell, “and the only way forward is break-up.” Um, at nearly 78 years old, the same line about being past a “sell-by date and not fit for purpose” could be applied to Sorrell himself. It’s a safe bet he’ll still be filled with resentment and vitriol for WPP in 2025. Also, how many WPP drones are permitted to work beyond age 65…? Ageism does not exist in adland’s uppermost echelon.

Ad mogul Sir Martin Sorrell: ‘I didn’t want to retire—I have a point to prove’

The former WPP boss on the economy, Facebook and why his S4 Capital is growing despite the coronavirus crisis

Sir Martin Sorrell’s headline-grabbing, acrimonious departure from WPP seemed set to mark an ignominious end to the global ambitions of the most powerful man in advertising. But two years on his new media venture, S4 Capital, has just reached a market valuation of £1.5bn, making it worth more than DMGT, the publisher of the Daily Mail and Mail Online.

Sorrell is now head of the UK’s sixth-biggest listed media company, with a value equal to a fifth of his bete noire WPP, and has continued to grow it even during the coronavirus pandemic.

Sorrell, 75, founded the business just months after resigning from WPP after an investigation into alleged personal misconduct. He has always strenuously denied wrongdoing, and departing as a “good leaver”—in the unusual position of not having a non-compete agreement—meant he was able to get up and running again at top speed.

Is Sorrell, who reckons he is still in with a “fighting chance” of achieving his pre-covid plan of doubling S4 Capital’s revenues and profits between 2020 and 2022, just a little bit smug about his rapid business bounce-back while firms such as WPP are now struggling?

“No, no,” he chuckles. “People ask me what motivates me, what drives me, why is it I didn’t retire. One reason is my mother’s genes, that’s a third of it, a third is I didn’t want to retire and play golf and do a portfolio job. And a third is that I have a point to prove.”

Sorrell feels that the business is performing in a “digital sweet spot” with two-thirds of revenues coming from creating digital advertising content, centred on the MediaMonks business, and one-third on automated online ad buying. Just more than half of total revenues come from creating campaigns and planning ad strategy for technology companies, which raises the question of what Sorrell thinks about the widespread advertising boycott of Facebook this month.

“At the heart of this issue is whether these platforms are tech companies or media companies, a publisher,” he says. “They all say they are tech companies. I’ve always held the view they are publishers and they must act like publishers and be responsible for their content. They can’t say they are digital engineers tightening nuts on digital pipes with digital spanners and are not responsible for digital content that flows through those pipes. They are.”

However, despite this belief he does not think that the ad boycott was the right approach to force Facebook to change. He says that since the last big ad boycott against YouTube in 2017, over issues including brand safety, the tech companies have “moved considerably”. He points to Facebook hiring tens of thousands of staff to monitor content, changes to algorithms, the rooting-out of offensive social media groups and the ban on political advertising, by Google and Twitter at least.

“I’m not of a view that a boycott is the right way to go,” he says. “The best way for advertisers to deal with this is to have that direct conversation with them. A threat is no good once it is exercised, a threat is only good if it is not exercised.”

He believes the impact of the coronavirus on the ad industry reached its nadir in April. Always fond of coining a phrase to describe the shape of an economic recovery, his latest prediction is that the world is likely to emerge from the coronavirus pandemic in a “reverse square root”.

Sorrell, who famously labelled last decade’s advertising recession as “bath shaped”, says that while specific industry sectors will have their own recovery shapes—V, U, L and even “a chair”—the overall global economy is likely to reset at a lower level.

“If you invert the square root you drop, recover but not to the extent before,” he says. “Overall it’s the best thing I’ve come across to describe it.”

Sorrell remains one of WPP’s biggest shareholders, holding a £150m stake, and also its most vocal and vociferous critic. He believes it should be broken up, so has anyone approached him about making an offer for some of WPP’s digital ad assets?

“No, amazingly no one seems interested in trying anything,” he says. “I wish someone would have a go. I think [advertising holding companies] are past their sell-by date and not fit for purpose any more and the only way forward is break-up. I’m not bitter; I’d describe it as realistic.”

When Sorrell set up S4 Capital, in which he has to date invested more than £60m of his own money, it was with an initial five year plan to build the business. Will he feel his come back is complete and retire then?