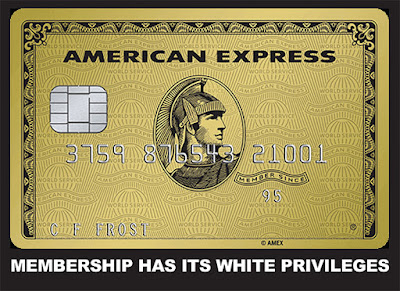 Adweek reported American Express shifted its global brand business from Ogilvy to mcgarrybowen—apparently without a review, making the move a major monument of Corporate Cultural Collusion. An American Express spokesperson stated, “mcgarrybowen will be working with us on developing a new global brand platform that will bring together all of our brand and product-related work under one umbrella. The new platform will capture the innovative work that is underway throughout our company and reflect the diversity of our business here in the U.S. and internationally.” Sorry, but diversity should not be mentioned when dumping one culturally clueless White advertising agency for another, especially when the new AOR has shown pride for being founded by nepotistic Old White Guys. Granted, the current mcgarrybowen leadership has diversified to feature slightly younger White men and White women, yet the agency website seems to have lost its diversity statement. Then again, maybe it’s fitting that a White advertising agency create a global concept for a company called American Express, which used to tout its exclusivity by declaring, “Membership Has Its Privileges.” In the advertising industry, membership has its White privileges.

Longtime agency will remain on roster

American Express has moved responsibilities for all global brand creative development, as well as U.S. execution of that work, from Ogilvy & Mather to Mcgarrybowen in an unexpected shift.

Moving forward, American Express confirmed that Ogilvy “will be responsible for international execution and they will also continue with some of their current U.S. work,” but declined to elaborate on which portions of the business will stay with the WPP network.

The client did not issue an RFP.

“Mcgarrybowen will be working with us on developing a new global brand platform that will bring together all of our brand and product-related work under one umbrella,” said an AmEx spokesperson. “The new platform will capture the innovative work that is underway throughout our company and reflect the diversity of our business here in the U.S. and internationally.”

Ogilvy has worked with American Express in some capacity since 1962. During that stretch, the agency has been responsible for such memorable lines as “Don’t leave home without it” and “Membership has its privileges,” and the partnership endured as other agencies came and went.

Spokespeople for both agencies deferred to the client for comment.

American Express, which is currently America’s fourth largest credit card company by membership, has long distinguished itself as an exclusive product in a series of ads aimed at upper income consumers. Its most recent global brand campaign, starring comedian Tina Fey, began running in 2014.

The reasons behind the decision to move that work to Mcgarrybowen are unclear at this time, but it’s worth noting that co-founder and chairman Gordon Bowen is a former Ogilvy executive who led the aforementioned “Membership has its privileges” campaign.

More than a year ago, American Express announced that chief marketing officer John Hayes would be leaving the company after more than 20 years as part of a larger streamlining effort. At the same time, the company created a global marketing operations unit led by vp Mike McCormack and promoted longtime executive Elizabeth Rutledge to the role of evp, global advertising and media.

White ad agencies, whose makeup and leaders reflect the C-suite of these brands, are inherently trusted because of that and given the keys to the Agency of Record kingdom, no review necessary.

Those same brands force minority owned agencies to compete against each other for crumbs, weakening every one of them as they throw precious resources into a losing game.

And, more and more frequently, those brands just end up awarding that "multicultural" business they were competing for to an enormous holding company white agency that conveniently throws together an "in-house multicultural expertise team" that fizzles and disappears once they win the account.

What would be really impressive as a show of diversity? If a brand ever, in this lifetime, awarded broad AOR duties, no-review, to a minority ad agency like they do the white ones, and DIDN'T relegate them only to the multicultural crumbs.

Let me tell you all what's going on here. Plain and simple, as you probably know, Amex lost the Costco Account, about a year ago. This in turn has had a disastrous affect on Ogilvy, with Amex cutting back on projects they had been giving Ogilvy for several years. This is all because Sir Ken Chenault in his ivory tower in lower Manhattan, couldn't cut a deal with Costco, and let hubris and stupidity on his part, get in the way. This guy is way behind the times, but why should he care that much?he is close to retirement, and will leave with a crazy Big package. Stockholders should speed up the process, as he is really out of touch with today's credit/chard card market. This guy needs to call it a day. The Costco debacle has hurt a lot of hard working Amex employees with massive layoffs, does anyone really care, besides those that are affected? You need to think about it. Now they want $550.00 for their Platinum card membership, are you kidding me or what? Chase And Capitol zone are closing in on Amex. Stockholders should act now, before it's too late!
John Mathew Sterling,
Greenwich, CT

Mr. Sterling who weighed in with his comments above, has it exactly right.
Unfortunately, I am one person out of thousands that lost their job at Ogilvy for exactly the reasons stated above.
The other card companies are closing in quickly, and they deserve to, they offer better deals, and the same, similar, or better perks,
Without you/me having to shell out $175.00 to $550.00 for the “privilege” of being an Amex member..
Enough is enough,
John Whittington
Westport, CT