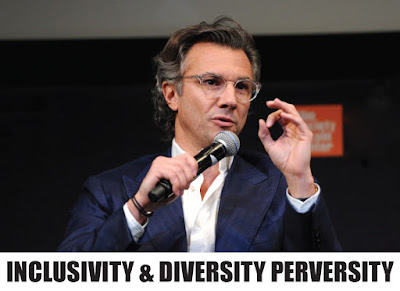 Adweek reported Verizon CMO Diego Scotti claimed his White advertising agencies made progress on his diversity demands, boosting people of color to representing 40% of staffs. Of course, Scotti offered no evidence or specific racial and ethnic breakdowns to prove the percentage. So it’s possible that White advertising agencies could fudge the numbers by simply being in a network whose holding company purchased foreign-based satellite offices or digital production houses. And it’s probable that Scotti’s 40% figure is 100% bullshit.

It’s fair to say that much of the recent focus on diversity and inclusion has largely focused on the former. While companies like Diageo and HP have over the past few years put pressure on their agency partners to become more diverse, not as much has been done to address inclusivity and what can be done to improve it in the workplace.

At this year’s Cannes Lions, Verizon CMO Diego Scotti shed some light on how the company is beginning to tackle the issue. This comes nearly three years after the company told its agency partners to hire more women and minorities, particularly in senior leadership roles. Although Scotti didn’t give agencies specific goals to meet—he doesn’t “believe in quotas”—he told them they had to make progress on this front.

Since then, Scotti said that “some agencies are doing better than others,” but overall progress has been made. According to Verizon, its agencies experienced a 25% increase in employees of color from 2016 to 2018, bringing them to a total of 40%. Additionally, Verizon saw a 2% rise in female employees during the same period, as women at its agencies now make up 51% of staff.

Scotti has held his agency partners accountable by meeting with their CEOs and head creatives each quarter to go over results. When agencies are in the process of hiring someone for a director position or above, Scotti also asks to see the final three candidates to ensure that they’re diverse.

The brand’s AdFellows program, currently in its third year, also fosters diverse talent via an eight-month rotation in New York, where participants have the opportunity to work at both Verizon and five of its agency partners. Verizon guarantees that 90% of AdFellows participants, who receive both a salary and living expenses during the program, will be hired by the end.

With diversity efforts underway, Scotti and his team are now setting their sights on inclusivity, both internally and at Verizon’s agencies.

“A lot of people just think about diversity in the context of increasing the pipeline of talent,” he said. “You might hire all the diverse people that you want, but if they come to an environment where they’re not going to feel included, then it’s just a waste of time.”

The company recently partnered with the Center for Talent Innovation, a nonprofit think tank, to study issues impacting retention of diverse professionals in the media, marketing and advertising industries. Scotti said the study was spurred on by the lack of data currently available on the subject.

“It was really interesting and surprising to us how little information exists out there about the state of inclusion in our industry,” he said. “Some of the learnings and insights that we got were pretty staggering.”

The survey was based on in-person and online focus groups, interviews and a survey of 1,757 respondents working in media, marketing or communication roles. According to the research, women are twice as likely as men to leave their current company within a year (12% vs. 6%). When it comes to cultural fit, the women surveyed were less likely to say that they fit in the industry’s culture than men (70% vs. 81%).

What’s more, a total of 60% of the professionals surveyed said they experience some instances of exclusion or discomfort, with women being more likely than men to say they have been underestimated, excluded or harassed.

The research also found that people of color are more likely to be subjected to microaggressions at work, like insensitive language or being mistaken for someone else of the same race.

“That was in and of itself a really interesting learning. The question is what can we do about it?” he said. “Many people don’t come to work with the idea of being insensitive or not being inclusionary, but things just happen, you know? So awareness is very important.”

At Verizon, Scotti said that the company is bringing awareness to the issue via unconscious bias trainings, which are now in their third year. Additionally, inclusivity is now part of scorecards and performance plans for managers at Verizon.

Scotti concluded by stating that although it’s difficult to connect business results strictly to diversity, the company is “doing better work than we’ve ever done” as a result of its efforts. He pointed to the brand’s recent Pride campaign, which features family members finally accepting their LGBT+ loved ones for who they really are.

Speaking from recent experience here, zero chance that Verizon's agencies would stand up to an audit of POC working there in meaningful roles. They're counting white Brazilians and white Spaniards and Malaysians, Chinese, etc. on visas as POC, and the AdFellows as employees even though they're glorified trainees. So Verizon is releasing data that looks good in an annual report, but is meaningless in real life.