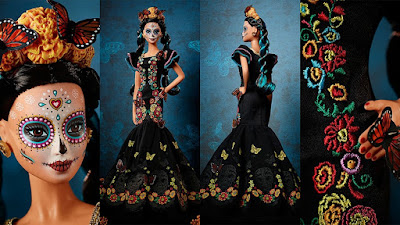 Adweek presented a perspective from Janel Martinez, where the writer opined the Día de los Muertos Barbie dances a tightrope between cultural appropriation and appreciation. Hey, it’s not the first time Barbie has crossed the color line and crashed her Dream Camper into Cultural Clueless country. 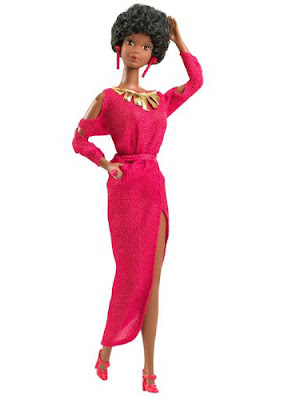 Mattel is no stranger to criticism over its Barbie brand. From limited, gender-specific professional choices to unrealistic body standards, the toy company has navigated its fair share of complaints involving the 60-year-old doll. Though Mattel has introduced several diverse, groundbreaking dolls this year—including the Barbie Fashionista line featuring two dolls with physical disabilities, the Inspiring Women series with civil rights leader Rosa Parks and Mexican artist Frida Kahlo and its latest release of gender-neutral dolls—the brand’s Día de los Muertos, or Day of the Dead, Barbie straddles the fine line between cultural appropriation and appreciation.

Before the start of Hispanic Heritage Month, the toy giant announced a limited-edition Día de los Muertos Barbie to honor the 3,000-year-old indigenous observance that celebrates the lives of deceased friends and family. While the holiday originated in Mexico with the Aztec, Toltec and other Nahua people, it’s celebrated in other areas of Latin America.

The $75 doll, which is currently sold out, sports a ruffled, long black dress “embellished with heart and butterfly details.” A crown of monarch butterflies and bright marigolds sits atop her head and traditional skull mask, better known as Calavera Catrina, makeup adorns her face.

Designed by Mexican-American Javier Meabe, the doll’s dress resemble ones he saw his mother wear. The designer’s details coincide with the holiday’s traditions, as marigolds are the main flowers used to decorate the ofrenda, or altar, where the spirits are welcomed back to earth. The monarch butterflies are believed to hold the spirit of loved ones, and millions arrive in Mexico like clockwork just in time for Día de los Muertos.

While Mattel tapped a designer who is of the community reflected, the commercialization of Día de los Muertos is a growing concern. Held Oct. 31 through Nov. 2, its proximity to Halloween has led some to refer to the sacred holiday as the “Mexican Halloween.” Marketplaces and retailers like Amazon, Party City and Walmart often profit greatly from it as well. A quick “Day of the Dead” search on Party City’s website, for instance, yields an assortment of party supplies, accessory kits and skull or skeleton-embellished costumes. Consumers can select and purchase these items without understanding the history behind the holiday or having any consideration for the indigenous community.

Though Netflix contracted an altarist from Oaxaca, Mexico and the pan de muerto (a version of pan dulce prepared for Día de los Muertos) was made by an Oaxacan baker based in L.A., this was still an activation. The cultural practices and decor were used to draw audiences to Netflix shows, not to authentically and respectfully honor the spirits of those who’ve passed on. The activation was covered by a bevy of Spanish-language outlets and powered by Latinos at the company, according to Chile-based platform Upsocl.

Marketing the observance in this way lessens its sacred meaning.

“I feel like some people think it’s a costume, but it’s not; it’s not a joke. It’s not a Halloween costume,” said Jessica Resendiz to Latinx culture and news site Remezcla on Día de los Muertos.

As the sacred observance grows in visibility, it’s moved from regional and national awareness to global recognition. But does the money always reach the communities that have enhanced these companies’ revenue?

Take Disney Pixar’s animated film Coco, which centers around the holiday. The film generated more than $800 million worldwide. During the film’s creative process, their team visited Oaxaca where cook Estela Fabian Mendoza, who is said to be the inspiration behind the Academy Award-winning film’s Abuelita Elena, has reportedly not received any money for inspiring the role. Pixar has not formally confirmed the connection, but it has been verified that Pixar producers visited their town around Shiin Naa Lasn, or Festival for the People, which takes place around Day of the Dead. Said producers were also present at Taller Jacobo where Fabian Mendoza has worked.

While she’s allegedly “happy to see the movie,” truly showing appreciation for a culture requires more than how you position it. There needs to be effort behind how you’re tapping talent from within that community and re-investing the earnings back into said community to create an equitable, long-standing exchange. If Fabian Mendoza were in the U.S., she’d have a strong legal case against Pixar for using her likeness without permission.

Pixar or any brand looking to draw inspiration from communities that aren’t often featured in stories should first ask permission. Nike learned that lesson after the company used indigenous designs from the Guna people of Panama without permission. Next, do your research. What would be considered exploitative versus culturally competent? In working with a diverse collective of creatives, researchers and strategists from your target market, you’ll be able to formulate an inclusive, respectful strategy. Lastly, consider donating profits made—and if none are generated, explore other avenues of support—to this community.

Whether people are in agreement over Mattel’s decision, the company’s goal with the collectible Barbie is exposure. But while the company’s goal for the Día de los Muertos Barbie is to introduce their customers to a culture outside of their own, it can provide valuable lessons to brands and companies. It’s time to take it one step further from exposure to an actual investment into the communities that have sparked the inspiration.

Janel Martinez is a Bronx-based writer and founder of award-winning site Ain't I Latina?, an online destination celebrating Afro-Latinas.