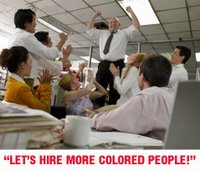 From AdAge.com (Click on the essay title above for more, including a chart detailing Agencies’ 2007 Goals For Minority Hires)…

Hiring goals
But since New York City’s Commission on Human Rights ended its investigation of Ogilvy and 15 other New York ad agencies, Mr. Gray has become an evangelist for diversity hiring. He has to be: Ogilvy and its brethren are under more pressure than ever after the commission last week released agencies’ goals for minority hires in 2007. Mr. Gray’s targets? For new hires at executive level, 16% must be minority. For general new hires, 33% must be minority.

There is still some fuzziness around these targets. First, it’s impossible to know how percentages will translate into human beings because agencies can’t predict how many people they’ll hire (or lay off) in a given year -- that hinges on the winning or losing of business. Moreover, the definition of “minority” has been left up to each agency. One executive said the definition at his shop is “nonwhite,” meaning that white women won’t count toward the goal. But that won’t be enough to appease critics who claim the bulk of minority hires will be Asians and Latinos, with African-Americans still lagging behind.

Agency accountability
Still, even with the potential for different interpretations of the targets, they make the agencies accountable for diversity hiring and have many shops panicking about how they’re going to make their numbers, a task they say is particularly challenging at the executive level where their poor hiring record is coming back to haunt them.

Realizing that this is now serious enough business to require a structural as well as cultural shift, Mr. Gray has taken several steps to make sure Ogilvy isn’t left behind. One tactic he is employing to ensure that its senior employees champion diversity consistently: tying attainment of corporate-diversity goals to performance reviews and pay. “You’ve got to ask leaders to make it a priority,” said Mr. Gray. (DraftFCB is doing the same.)

Culture assessment
Mr. Gray’s involvement in diversity started several years ago. Sensing that Ogilvy needed to beef up its performance, the agency hired consultant FutureWorks to assess the company’s culture and programs, and make recommendations for improvement. Like most large agencies, Ogilvy participated regularly in industry internship programs such as the American Advertising Federation’s Most Promising Minority Students Program. In addition, its recruiters attended annual recruitment fairs at historically black colleges and career events targeting minority students. But those efforts weren't sufficient.

Hiring minorities, particularly mid- and senior-level employees, into the business is tough for several reasons. “You’ve got to have senior, visible minorities who can act as validation” that the industry has opportunities, said Mr. Gray.

Renetta McCann
Renetta McCann, CEO of StarcomMediaVest Group and the industry’s highest-ranking African-American woman, takes seriously the influence she has on minority employees. In December, she flew from Chicago to New York to attend a holiday party thrown by a group of MediaVest minority employees who regularly gather to share experiences and offer support. “It was inspirational,” said Kendra Hatcher, senior VP-contextual planning, MediaVest. “And powerful. She flew in specifically for that, and [MediaVest CEO] Laura [Desmond] came up, too.”

The industrywide practice of “just-in-time” staffing, which means agencies hire only when someone leaves, is another reason more minorities don’t come in at middle and senior levels. Time’s limited, and particularly in the clubby world of advertising, word of mouth is one of the best tools for sourcing talent. “It’s often: ‘Call someone you know.’ In many cases, no one knows an African-American,” said Robert Brown, director of new business and account services at Carol H. Williams.

Ogilvy, Arnold, BBDO and the Interpublic Group of Cos. have put on retainer several executive-search firms, including Tangerine-Watson and Wesley, Brown & Bartle, each of which is building a pipeline of minority executives for agencies to tap when positions open. “We introduce two or three candidates a month,” said Carol Watson of Tangerine-Watson. This, she said, “helps for an industry that hasn't had a history of relationships in the minority community.”

Lower pay scale
Advertising’s lower pay scale vs. other industries is widely cited as a barrier to hiring and retaining minorities. “Advertising’s centered in cities that have high costs of living and doesn’t pay well in the early years. A higher number of kids who are not minorities can live off of mom and dad for the first couple of years,” said Jason White, account director for Nike at Wieden & Kennedy, Shanghai. “The best and the brightest are heavily recruited out of college, and there’s a percentage of minority prospects who figure advertising just isn't worth it.”

Interpublic’s combating that problem by offering 10 top minority candidates jobs in Inter-Act, a two-year talent-and-diversity program. Each employee takes on four six-month assignments in various Interpublic-owned agencies. At every placement, students have a coach and regular performance reviews, and they are exposed to and trained in multiple advertising disciplines. “We don’t have to compete on money alone,” said Heide Gardner, Interpublic’s VP-diversity management. “In our program, candidates know the agency is investing in them. They’re valued, nurtured and provided with access to senior people.” Interpublic’s investment is “in line with what other Fortune 500 companies with robust diversity programs spend,” Ms. Gardner said. Generally, that’s between $3 million and $5 million.

Ms. Gardner, Mr. Gray and others say getting young minorities to stay in the business is one of the greatest challenges of all. Common land mines, in addition to the lure of jobs in higher-paying fields, are isolation and a lack of career development.

Arnold Worldwide outreach
“I beg, I plead with [young minorities]: I tell them they’ll make a real difference,” said Tiffany Warren, director of multicultural programs and community outreach at Arnold Worldwide and a former manager of diversity programs at the American Association of Advertising Agencies. At Arnold, Ms. Warren launched numerous programs, including a diversity internship program and Arnold’s Multicultural Employee Network to foster support, development and retention.

BBDO, New York, is executing a strategic plan for retaining its minority employees, and Y&R is forming diversity-leadership committees in each North American office that will oversee outreach, recruitment and retention. John Osborn, president-CEO of BBDO New York, maintains his agency will make its targets.

“We’re confident,” he said. He’d better be, because as Mr. Osborn and his counterparts are clearly now realizing, the diversity issue can no longer be ducked.
Posted by HighJive at 12:22 PM