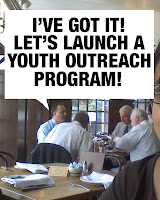 The letter below appeared at Advertising Age. A MultiCultClassics response immediately follows…

Dan Wieden’s swerve to talk diversity instead of his planned presentation at the Four A’s Leadership Conference took the audience by surprise. It was a good surprise. And it was a challenge we all needed to hear. Like Dan, I have not frequented the annual conference, although not for the same reasons. I was glad that I took the time and funds to attend the conference this year.

I was heartened to realize, that, like Dan Wieden, I am with an organization that is making strides on diversity in our industry.

For the past 13 years, the Boston Ad Club has recognized workplace diversity via the Rosoff Awards. This year we upped the ante. Partnering with corporations and universities, we gave $100,000 worth of scholarships to Boston high-school students. We don’t just write a check and send them on their way. By capturing their interest in advertising at a young age (high school vs. college) and assigning them a mentor in the industry to keep them on track, we are working to cultivate diversity. Marketing mentors from agencies and the client side will check in throughout a scholarship recipient’s college career to help him navigate the world of internships and, hopefully, the first job of many in our field.

While attendance is down at many industry events because of the economy, we had double the attendance at this year’s Rosoff Awards. We also have a commitment from a major corporation to help fund our effort and implement a training program.

As Arnold Rosoff (the founder of Arnold) said at the Rosoff Awards this year to Kathy Kiely (president of the Ad Club)—and I’m paraphrasing—it is too bad that we still need to do this.

As always, MultiCultClassics appreciates any effort to make the advertising industry more inclusive.

Yet the propensity to embrace youth outreach programs is truly perplexing. Does it indicate some sort of concession, perpetuating the belief that qualified minority candidates at mid- and senior-levels simply do not exist? Is there an inherent laziness at play, with executives settling for the easy and expected tactic?

The AAF’s Most Promising Minority Students Program launched in 1997, while the 4As Multicultural Advertising Intern Program has been around since 1973. Nonetheless, both trade organizations acknowledge the continuing dearth of diversity. “We’ve still got a lot more work to do” has become a cliché in every discussion on the dilemma. Youth outreach programs are tried-yet-not-true fixes.

It’s incredible to watch advocates for change like Tiffany R. Warren forced to repeat the same advice again and again. It’s also amazing to hear Sanford Moore repeat his positions for generations. Oddly enough, there are never open responses from Madison Avenue. Instead, executives scurry back to their offices and emerge months later to announce another youth outreach program. Or the promotion of a Chief Diversity Officer. Or a contrived scheme to delegate diversity.

Why can’t the industry boasting awesome creative problem-solving skills come up with new ideas? Why does everyone appear so unwilling to deal with minorities already holding a college degree and of legal drinking age?

It’s time for Mad Men to stop acting like schoolchildren.
Posted by HighJive at 12:06 AM