9446: Viewing The Tanning Of America. 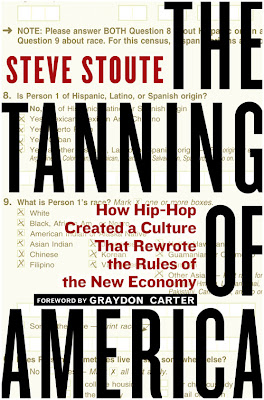 The U.S. Census figures spotlighting the dramatic rise of minorities have inspired many to predict and pre-define the new world of marketing. From cross-cultural zealots to new majority mavens, self-proclaimed thought leaders are scrambling to push personal visions—and professional agendas—for the future. Even the White advertising agencies are cluttering the conversation, presenting more half-baked notions on the way things will be.

The Tanning of America by Steve Stoute joins the growing multicultural marketing melee, as the founder of Translation drops his perspective with a hip-hop beat. Stoute’s book reads like a retrospective of hip hop, autobiography, account planner report, self-promotional press release and minority agency capabilities PowerPoint deck—all rolled up into 300+ pages. Yeah, Stoute delivers a compelling viewpoint, replete with name-dropping and revisionist history. But does he offer any breakthrough thinking here?

The influence of Black culture on the global society has been publicly stressed by adpeople since at least 1971. Every minority agency seems to have its own version of an urban trendsetter revolution. Hell, faux futurist Marian Salzman has already claimed to be the first on Madison Avenue to spot and identify wiggers. And MultiCultClassics has repeatedly noted how White advertising agencies love hip hop. Why, adpeople worldwide have embraced the musical expression and artistic culture as a campaign concept. Stoute covers familiar ground with his book, albeit from the angle of someone with direct connections to recording artists. Being a music maker, however, does not translate to being an ad maker. Just ask will.i.am or Jay-Z.

Stoute may someday prove to be a respectable marketing mind. But it would be nice to see consistently excellent work produced by his agency before anointing him an adman, new economy guru, hip-hop expert or whatever label he chooses. For now, The Tanning of America is a contemporary remix of the classic tune that most multicultural agencies have been playing for decades.
Posted by HighJive at 1:01 AM

Cant hate a guy for finding a niche, and proclaiming himself as a expert in it. Dont act like these white folks havent heard it already. Bigger question is once america becomes more enlightened what becomes of the steve stoutes and black agencies of the advertising industry.