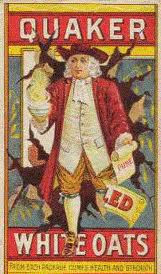 Advertising Age reported PepsiCo shifted its Quaker Oats business to a new agency sans review. It’s actually another example of Corporate Cultural Collusion perpetrated by Omnicom. Give the holding company credit for apparently having locked PepsiCo into a long-term contract, as evidenced by the Quaker Oats Man’s migration from Element 79 to Goodby, Silverstein & Partners to Juniper Park to Energy BBDO—all shops within the Omnicom stable. It’s only a matter of time before the brand goes to Fathom Communications.

PepsiCo has shifted creative duties for its Quaker portfolio of foods and snacks to Omnicom Group’s EnergyBBDO, Ad Age has learned.

The move, which came without a review, will shift the business handled by BBDO sibling Juniper Park in Toronto to Energy BBDO, the Chicago office of the BBDO global network.

Asked what was behind the agency change, Quaker spokeswoman Candace Mueller said, “As part of PepsiCo’s strategic investment and productivity initiatives, Quaker Foods & Snacks North America is moving to one global creative agency, Chicago-based Energy BBDO. Based on Energy BBDO‘s expertise for setting global strategy and developing breakthrough creative thinking, we believe they are the right agency to help Quaker accelerate our brand positioning worldwide. We sincerely appreciate the work that Juniper Park has done for the Quaker business and thank them for all of their efforts.”

The news comes on the heels of Quaker’s hiring a new top marketer. In January it named Justin Lambeth—a former Frito-Lay VP who led marketing for brands such as Lay’s, Tostitos and Sun Chips—CMO.

The move is a blow to Juniper Park, once a darling among Pepsi ‘s agency roster. Losing the Quaker business is another piece of bad news for the shop, which just a few months ago also lost PepsiCo’s Frito-Lay Sun Chips and Lay’s brands to Energy BBDO.

At that time, the agency still had Quaker as well as work for PepsiCo’s global nutrition group. But with the Quaker shift, Ms. Mueller said that “Energy BBDO will be responsible for setting Quaker’s global strategy and developing a global ad campaign in partnership with the Global Nutrition Group.”

It’s unclear whether Juniper Park will do any additional work for the global nutrition group. Frito-Lay was a founding client when Juniper Park opened its doors in 2007, and the agency picked up Quaker in October 2009.

The PepsiCo business on the whole probably accounted for most of Juniper Park’s business. Its other clients include Virgin Mobile, Delta Hotels and Canadian media company Corus Entertainment. Asked about the shop’s viability, a BBDO spokesman said that the Juniper Park “continues to operate in Canada as part of the BBDO Worldwide network.”

Energy BBDO has benefited from its sibling’s losses and has picked up activity on the new-business circuit. Last year, Energy BBDO picked up a sizable portion of the global SC Johnson account that was formerly at DraftFCB.

PepsiCo, which has a relationship with Omnicom Group, is known to play musical chairs with agencies in the Omnicom family, regularly shifting business from one shop to another. Quaker, for example, has shifted hands many times in the past five years. In 2008, PepsiCo handed Goodby Silverstein & Partners the Quaker account after it had been at Element, an Omnicom agency formed primarily to handle PepsiCo’s business. Then in 2009, PepsiCo moved the Quaker account to Juniper Park, and now it’s parked at a new agency once again.

PepsiCo has been trimming its roster of agencies. Last month, it said on the beverage side of its business that it would cut ties with more than 100 agencies. 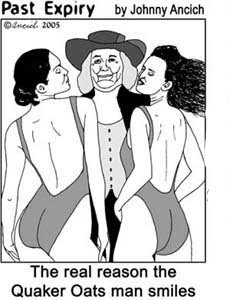