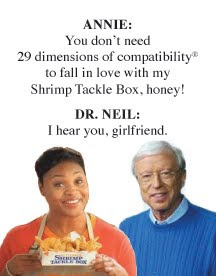 Advertising Age reported eHarmony hired GSD&M as its new creative AOR. Look for the first promotion from the Austin, Texas-based shop to seek suitors for Annie the Chicken Queen.

EHarmony has made a match with Austin, Texas-based GSD&M as its North American creative agency of record. GSD&M replaces the online-dating site’s agency of 10 years, Los Angeles-based DW&H.

The creative review followed a media review eHarmony launched in 2010, at the end of which it chose Omnicom Group’s OMD as its media agency of record. The selection of sibling GSD&M means that most of eHarmony’s advertising is now centralized within Omnicom Group.

“We really looked at GSD&M as a partner that has a track record for working with companies with a deep-rooted mission and purpose. … We felt they would make a really good partner for us,” Julie Fields, eHarmony’s VP-brand marketing, told Ad Age. “This agency has a heart, and that’s something that is important to us as we continue to build our future.”

Duff Stewart, president-CEO of GSD&M, said it was especially fulfilling to pick up the account because when the process began in October it seemed that the agency’s headquarters location in Austin might put the shop at a disadvantage. “But we said, ‘Let us come visit you and … get to know you,’ and it has been great since then,” Mr. Stewart said. “They were used to having someone nearby, but we were able to demonstrate that we can build brands that have a purpose.”

The timing is right for GSD&M to pick up a new account, given that its client of nearly 30 years, Southwest, last month began a review looking to give a new creative agency a piece of its $250 million business.

According to Kantar, for the past few years eHarmony has spent about $80 million in domestic measured media.

EHarmony, based in Santa Monica, Calif., was founded in 2000. It operates in the U.S., Canada, the U.K., Australia and Brazil, as well as in 11 countries across continental Europe through its affiliation with eDarling. The company claims that an average of 542 eHarmony members in the U.S. marry every day as a result of being matched up on the site.

Ms. Fields said eHarmony will introduce a new creative campaign later this year. Broadcast will remain a key component of the mix, and the focus will most likely be on modernizing the site to have it perceived as being not only about meeting people but about building lasting relationships.
Posted by HighJive at 11:25 PM

Wow, great article, I really appreciate your thought process and having it explained properly, thank you!