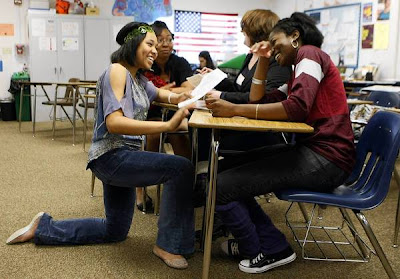 The Los Angeles Times reported on a community effort that will hopefully not draw a copyright infringement complaint from Mickey D’s 365Black.

The Black365 Knowledge Bowl Competition, a ‘Jeopardy’-style contest in the Antelope Valley, quizzes high school students. The founder grew up with a limited view of paths open to young African Americans.

Growing up in the Antelope Valley, Jamaal Brown aspired to be a professional basketball player.

“I thought African Americans could only be athletes, gang members, entertainers and drug dealers,” he said, referring to media stereotypes that convinced him his career paths were limited.

But when minor surgery for a heart condition foiled his pro ball ambitions, Brown turned to books and, in doing so, devoured information about black history. Valedictorian for his Lancaster High School class, he won a scholarship to Cal State Long Beach, one of eight universities that recruited him.

Armed with a degree in business management and information systems, he launched the Black365 Knowledge Bowl Competition last year, a “Jeopardy”-style contest that quizzes high school students on black history.

On Saturday, students from northern Los Angeles County’s Antelope Valley High School, Knight High School and SOAR (Students on the Academic Rise) High School and from South L.A.’s Animo Locke II college preparatory charter high school will gather in Palmdale to challenge each other on their knowledge of black history.

“I wanted to do the best that I could do to ensure that no young person grew up as short-sighted as I was,” said Brown, 29, who also created a 365 Days of Black Facts Calendar, which showcases positive accomplishments of people of African descent.

“I wanted to create an institution where our community could celebrate our youth more than just for their athletic prowess ... but for their academic prowess.”

A sampling: name the first African nation to gain independence (the answer is Ghana); identify the author of this quote, “You have to be taught to be second class, you’re not born that way” (that would be actress, singer and civil rights activist Lena Horne).

“It forces students to step beyond their normal duties,” said Lawson, who teaches history.

Winners receive a trophy as well as cash to go toward education expenses, Brown said. Rewards for runners-up include medals, mall gift cards and black history books. Sponsors of the bowl — which include the United Christian Fellowship in Palmdale, where the event will be held — made cash donations ranging from $50 to more than $250, according to Brown.

But prizes aren’t important to Jennifer Williams, captain of the SOAR team, winners of the inaugural competition.

“It’s not about the money,” said Williams, 17, who with her teammates spent eight hours each weekend cramming for the quiz and used their 30-minute lunch break twice a week to drill. “For me it’s more about gaining the knowledge.”

Team member Alexis Hithe agreed. “I want to know where I came from,” she said. “And I feel that I can’t get ahead in life if I don’t know my roots, and black history is my roots.”

Both Williams and Hithe said they had saved their $100 winnings from last year.

For Brown, currently a counselor at Antelope Valley Youth Build, a community development program that helps youths from low-income communities, a critical goal of the competition is to promote a positive image of African American young people.

“Our community needs ways in which we can uplift and celebrate our youth,” said Brown.

Jessica Nesbitt, 17, Animo Locke’s team captain, said everyone would go away victorious if they succeeded in showing the community that “black kids are intelligent and talented.”

“Just because we might live next door to gang-bangers, I hope they learn that there’s more to us than that,” she said.
Posted by HighJive at 3:13 PM