9935: Being Open With Recruiting Tactics…? 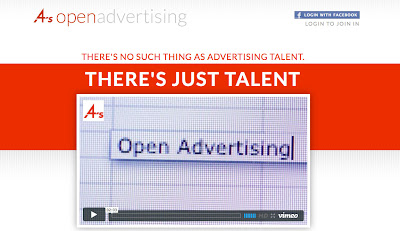 The New York Times reported on a new 4A’s brainchild designed to recruit young people to the advertising industry. The online video looks like someone tried to sneak a diversity initiative into the project too. However, if one really wants to woo a youth audience, don’t do it with work that appears to have been conceived and executed by, well, Old White Guys. The grand scheme is called Open Advertising, which sounds oxymoronic. Wonder if the openness will include revealing the issues surrounding diversity—as well as gender and ageism. Plus, the Digital Set being targeted should be apprised that digital salaries are lower than traditional advertising salaries.

Pitching the Ad Life to the Digital Set

THE leading trade organization for advertising agencies is intensifying efforts to cast a wider net when recruiting employees with an initiative aimed not only at students, but also at talented younger people who work in other industries.

Executives of the organization, known as the Four A’s, are to describe the initiative during their annual Transformation conference, to be held in Beverly Hills, Calif., beginning on Monday and concluding on Wednesday.

The centerpiece of the initiative, called Open Advertising, will be a video-focused Web site, openadvertising.aaaa.org, that is to go live on Wednesday. It is meant to address a survey last year that concluded the industry was falling short in its attempts to attract and keep talented employees.

The contents of the Web site will be devoted to subjects like creativity, technology and agency work life. Another survey, conducted this year by two Four A’s members, Colle & McVoy and Partners & Napier, found considerable misconceptions on those subjects among the target audience.

The goal is “to tell the story of the industry in a high-touch, high-engagement way,” Mr. Benett said, and show advertising in a way that makes it appealing to “career switchers” as well as those seeking their first jobs.

Mr. Benett acknowledged that “you can never ‘solve’ the talent problem for the industry, because talent is going to constantly evolve.” But the industry needs to move beyond “a communications effort or a P.R. campaign,” he added, and address its recruitment problems in a substantive manner.

“Three months ago, I was on a panel and someone asked, ‘How do I get into advertising?’” Ms. Hill said. “We want to make it easy to answer.”

“This is about bringing in a generation that’s been content creators all their lives,” she added, on social media like Facebook and YouTube, “and making advertising the preferred career choice for talent of all stripes.”

The discussion of the initiative is among steps being taken by Ms. Hill and the Four A’s to make the conference agenda more compelling than “a bunch of agency talking heads saying the same stuff over and over,” as she put it.

The fact that registrations for the conference, at 1,300, are higher than had been expected indicates that “a lot of people think they’re going to get value out of it,” said Chuck Porter, the 2010-12 chairman of the Four A’s who is also chairman of Crispin Porter & Bogusky, part of MDC Partners, and chief strategist of MDC.

“People are busy, and the Four A’s has begun to understand this is business,” Mr. Porter said. “Nobody feels comfortable flying off to Bermuda.” (In 2000 and 2005, the organization, formerly the American Association of Advertising Agencies, held its annual management conference, a predecessor to the Transformation conference, in Southampton, Bermuda.)

“It’s less about socializing and golfing,” said Greg Stern, a Four A’s board member who is chief of Butler, Shine, Stern & Partners, and more about offering “a results-oriented conference” with “substantive, significant topics relevant to everyone in the business.”
Posted by HighJive at 10:38 PM