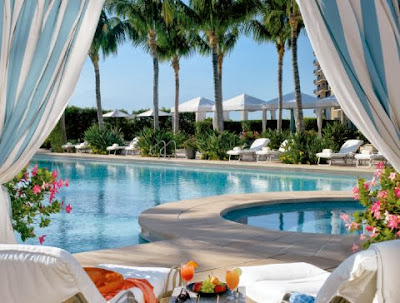 Advertising Age reported bigwigs from Publicis Groupe and Omnicom will hold a secret meeting on October 18 at The Four Seasons Hotel in Miami to introduce themselves to each other in preparation for the inevitable merger. Each key executive is expected to “deliver short presentations explaining their agencies’ unique brand platforms” to the group. Um, any agency in a holding company has pretty much forsaken uniqueness—especially in Omnicom, where no distinctions are made between, say, Goodby Silverstein & Partners and Fathom Communications. Additionally, CEOs representing minority shops will likely be not invited, ignored or mistaken for hotel help.

As the folks behind the Omnicom-Publicis merger take the necessary steps to overcome the deal’s regulatory hurdles, key execs from large agencies of both holding companies are quietly preparing for a meet-and-greet in Miami.

The event is taking place at The Four Seasons—which sits on Brickell Avenue and overlooks Biscayne Bay—on October 18.

It marks the first official joint event between the U.S. and French giants since the news of the mega merger broke in July.

Those invited—a select group of no more than 100 execs, according to executives familiar with the matter—will include global CEOs from big agency networks at Omnicom Group and Publicis Groupe. For many who have never met or aren’t well acquainted, it’s an opportunity to get to know one another. But while the weather is expected to be sunny and in the mid-80’s, it won’t be just a meet-and-greet over umbrella drinks. The execs have been asked to deliver short presentations explaining their agencies’ unique brand platforms in preparation for becoming a unified company. Omnicom declined to comment and Publicis didn’t respond to a request for comment.

The attendees, of course, will need to be careful in their conversations. Until the merger passes regulatory tests and the U.S. and French giant officially meld into one conglomerate (it will officially be based in the Netherlands) the agencies within the publicly-traded holding companies are fierce competitors. So, they’ll refrain from presenting anything that smells of competitive information.

According to executives familiar with the matter, the holding companies have advised shops not to present material that hasn’t gotten a legal stamp of approval. The agency execs have been given guidelines outlining what they can and cannot say in the closed-door meeting. The guidelines are meant to remind the execs that they’re not siblings until the closing of the deal and to ensure that they refrain from sharing documents with opinions about the merger transaction or sensitive information about the agencies and their clients.

Right now, executives familiar with the matter say they expect the deal will close sometime in the first quarter of 2014 and are bullish they will secure the necessary approvals for the deal in global markets. A note from Deutsche Bank analyst Matt Chesler in late September following a meeting with Omnicom Group CFO Randy Weisenburger stated: “[Management] said things are going well for a complex, cross-border transaction. Have filed in US, EU, India, Australia, & others, with 6-7 more to go. Since the review of media buying will be on a country-by-country basis and is only 15-20% of combined [revenues], they are not concerned.”